Preston North End centre half Paul Huntington says the Lilywhites have to be more clinical in front of goal following their clash with Norwich City at Carrow Road. 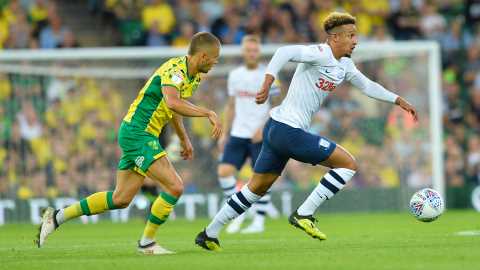 The Lilywhites had the better chances in the first half and again at the start of the second, but were undone by late strikes from Teemu Pukki and Alex Tettey and after the game the long-serving North End defender admitted the team have to put away the chances when they come along.

“We had Darnell’s chance in the first half, then Louis Moult had one cleared off the line, before Callum [Robinson] hit the bar, but they then had two chances and put them away and that is the difference at this level,” he told iFollow PNE.

“It was a huge disappointment to let them score the first goal, because goals change games and once they got theirs it was going to be difficult.”

Until the opener ten minutes from time the No.23 felt the game was comfortable and there had been little threat on Declan Rudd’s goal.

“Even with ten minutes to go, before they scored on 80 minutes, it felt so comfortable and it was just the goal that was lacking, so it is disappointing,” He continued.

“Whilst the performance wasn’t great, we have done enough away from home and if we had taken one of our chances, that would have given us the platform to then go on and win the game.

“At the moment we are disappointed, because we felt that at 0-0 with ten minutes to go away from home we had done enough to get something from the game, but we didn’t take those chances and we have been punished for it.”

But with another away game on Saturday, there is a very quick chance to turn things around and put another three points on the board.

“It will be another tough game at the weekend, another one away from home.

“Whilst the performance was okay against Norwich, it is important we get that first goal; that changes the game, so we move on to Saturday and make sure we are right for it,” he added.