Callum Robinson felt it was important for North End to take the positives from their 1-0 defeat to recently relegated Swansea City, following Saturday’s encounter at the Liberty Stadium.

The PNE No.7 was one of a number of players to go close to scoring an equaliser for the Lilywhites in a dominant second half display from the visitors, after Jay Fulton headed home the decisive goal after 33 minutes.

Despite the natural disappointment of defeat, the 23-year-old stressed that he and his team-mates must aim to build on their encouraging play, particularly from after the half-time interval, as they look to bounce back from the narrow loss. 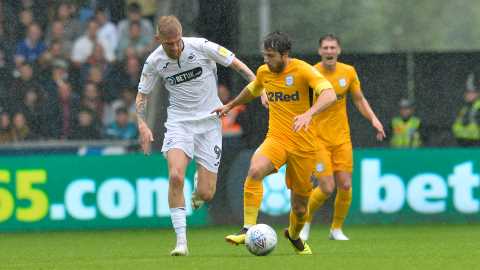 “We’re gutted, we gave it our all and obviously that wasn’t enough, but I think we created enough chances, you’ve just got to put those away,” the forward told iFollow PNE post-match.

“I think if we had got the one, we would’ve gone onto win the game. We penned them in for most of the second half and we knew we could’ve played better in the first half, but it’s one of those [days]. It’s a gutting feeling but we’ve just got to keep things moving.

“I think we just needed to believe in ourselves a little bit more and be a bit more confident on the ball [in the first half]. We knew we were miles better and that’s what we showed second half. If one goes in, we would’ve possibly go on to win the game.

“It’s one of those games where it’s annoying but we’ve just got to stick together. It’s still the second game in and we’re still getting used to a few of the new lads as well, so hopefully it will work out together.”

Robinson said the Lilywhites needed to take confidence from their second half display and take that forward, with Morecambe playing visitors to Deepdale on Tuesday night, with another relegated Premier League side in Stoke City next up in the Championship in PR1 next weekend.

“Obviously, they [Swansea] are a big club and they’ve been in the Premier League, but we’ve been there last season and beat teams that have come down and we know that we could’ve done better, especially in the first half.

“We don’t give anyone too much respect in this league and I think in the first half, we let them off the hook a few times. So it’s one of them, we didn’t respect them second half and showed them what we could do, so we’ve got to take the positive out of that because they should be up there towards the end of the season and I think we’ve outplayed them for the majority of the game.

“We had a few chances and Lukas had his shot, I had a few efforts and it’s one of them where on another day, the pass back to the ‘keeper [goes] half a yard Lukas’ side and he could have put it round the ‘keeper or dinked him.

“I think the new lads did well and with the more weeks they have training with us, they will get used to things. We have new players who are learning and as the weeks go on, we’ll be much stronger.

“We’re looking forward to it [facing Morecambe], to try to get a win and get the good feelings back into the camp and then obviously back into the league for next Saturday and it would be nice to get a good result on Tuesday night.”