Lewis Simmons was pleased to make his mark by scoring and helping the youth team’s back four to complete a clean sheet in the 3-0 Youth Alliance Cup win against Port Vale.

North End’s youngsters overcame some pressure from the visitors midway through the first half but were comfortable for the vast majority of the game, Simmons scoring a superb second goal just before the break to add to that sense of control.

The 17-year-old found the top left corner with a perfectly struck first time effort from 20 yards and he admitted that scoring against Vale has become a familiar feeling for him in recent years. 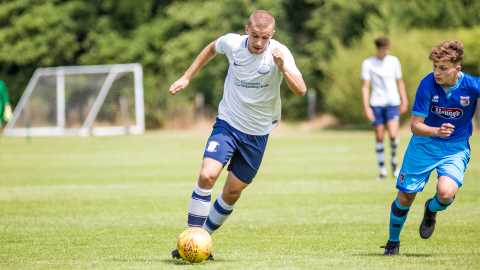 “It was really good that we kept a clean sheet, that’s massive for our team and we scored three goals as well which is always important,” Simmons told PNE.Com.

“It’s always a boost to go 2-0 up, it gives you that little bit of room for error in case you do concede and then you have that extra goal to have a bit of breathing space.

“The third goal obviously killed the game off for us. We created a lot of chances, but we could’ve converted more of those and made it even more comfortable.

“It’s always good to score, I usually score two or three a season and they always seem to come against Port Vale. I’ve scored against them for the U15s, U16s and last season I scored a header in the away game. It’s quite a nice goal in this game which was good and good to get off the mark for the season as well.”

Simmons, who has played at right-back for most of the season so far but moved into central midfield late on against Vale, hopes his versatility can help him keep his place in the side ahead of the youth team’s midweek trip to face Shrewsbury Town on Wednesday afternoon.

“It’s always good for a manager to have players who can play in different positions and it’s good for myself as well because it gives me that extra chance when it comes to team selection.

“We’ve got a strong back four at the moment and a nice togetherness in the backline . It’s about keeping the shirt, football can be a selfish game so I’ve just got to keep trying to do the best I can by working hard and putting 100 per cent in to keep that shirt.

“I’ll be fresh and raring to go at Shrewsbury and hopefully we can get the job done there and start getting some points together in the league as well.”