Preston North End come to their season mid-point after the weekend’s clash with Sheffield Wednesday and manager Alex Neil has given his assessment of the campaign so far.

20 December 2018
The Lilywhites boss spoke to iFollow PNE ahead of his side heading across the Pennines to face Jos Luhukay’s Owls in their 23rd game of the season, their final match before Christmas, and he said that progress was being made, but there was more to come.
Having only lost one of their last 12 Championship encounters Alex’s side have moved from the foot of the table at the start of October, to potentially reaching Christmas in the top half of the table – if they can get the win at Hillsborough and results go for them elsewhere.
And the gaffer is pleased with the developing nature of the group, especially with the problems that have been directed their way in terms of injuries in the opening half of the season.
“It has been a bit of a mixed bag,” he said. “We didn’t start the season well. The strange thing for me is that I didn’t think our performances were as bad as the results suggested in the first ten games. There were some really good games in there that I thought we did well in.

“Over the last 12 games we have then gone on a good run. What it has shown me, is nothing I didn’t already know, but that the fine margins between winning and losing can really dictate your season. 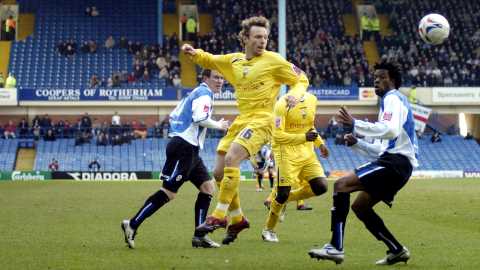 20 December 2018
“We have certainly found ourselves on the wrong end of some of those fine margins – I think immediately of the West Brom one that came off Ben’s [Davies] head and loops in the top corner – so we have certainly been unfortunate at times, but I’m a big believer that you make your own luck and you get eventually what you deserve.
“We have picked up some good results of late – we are closer now to the top six than the bottom three right now in terms of points, which is the first time we’ve been in this situation this season and we really need to kick on now and hopefully we can get some business done in January and get some of our injured players back and if we can do that, there’s no reason why we can’t have a good second half of the season like we did last year once again.”
The trip to the steel city is one the where Alex is hoping to change his previous experiences at Hillsborough and is certainly motivated to do so, as he reflected on the side’s trip there in the latter third of last season.
“It was one of the most bizarre games I have been involved in,” he recalled. “The first half we played really well; we moved the ball well, created some good chances and I could only see one team going on to win the game, but they then scored a good goal – a looping header into the corner – and from that point our reaction was really disappointing.
“Defensively we didn’t do well enough and they took full advantage. Nearly every shot they had went in the net.

“Sometimes you get games like that and we don’t really want to revisit it. We want to make sure that we go there and put in a good performance and make sure we try and keep this good run going.

19 December 2018
“If you have been somewhere and you’ve been turned over with a heavy scoreline, as 4-1 in, I think naturally you go back there and think ‘I’ve got to put this right’. All players use different motivating factors and if it’s a motivation for some of our lads, then great.
“Is it a motivation for me? I would say so. I want to go there and put a better performance in.
“Twice I have been to Hillsborough, with Norwich and PNE, and neither of my teams have done well, which is frustrating. I think it is probably the one ground we seem to struggle at the most and I would like to improve on that.”
But in front of him, trying to ensure there isn’t an early Christmas present for everyone connected with PNE he is well aware there is a talented Owls squad who will be wanting the same for their side.
“If you look at their squad, they have some real quality players and they will be looking at it thinking they need to pick up more points and improve.
“Everyone connected with the club will be hoping they can put a good run together.
“With the players they have got, they should be a tough game for anyone,” he added.