Preston North End manager Alex Neil sees the weekend’s final home game before Christmas as the start of an important period of games.

12 December 2018
The Lilywhites face Millwall at Deepdale, the first of five games in 17 days that could provide an idea of the direction their second half of the season could take and the PNE boss is hoping to continue the recent run that has seen just one defeat in 11 games.
“If we can maintain the form we are in at the moment, having taken 20 points from 11 games, we will be happy,” he told iFollow PNE to look ahead of the visit of the Lions to PR1.
“Normally, when you are talking about promotion form, you say two points from each game, so we are not far away from that which is really good form. If we can maintain that for maybe the next eight, nine, ten games, then it should set us up for a really good end to the season.

“We know this period of games is crucial. There are a lot of games getting played in a short space of time; we’ve still got a lot of injuries to deal with and if the lads can maintain and keep the performance levels they have been showing of late, we should be fine.” 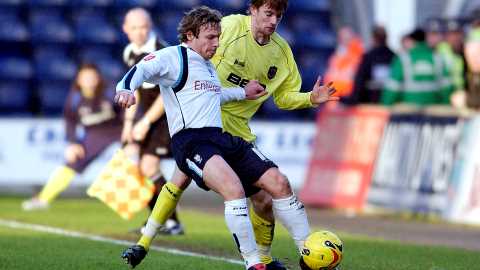 13 December 2018
The opponents trying to stop his side from continuing their efforts to continue to climb up the table are a side who also had a good 2017/18 and have had a more steady start to the new season.
“They’ve got some good players,” Alex said of Neil Harris’ Millwall. “Neil has done a really good job there. They have found it difficult this season for a variety of reasons; one of the main ones being they lost a lot of good players from last year – [George] Saville went to Middlesbrough, they lost Webster and Ben Marshall went back to Wolves, so that has been difficult for them.
“If you look at a lot of the teams from last year, regardless of what you did last season, this year is very different.
“Look at Norwich, who were 14th or 15th last year, they are top of the league; Sheffield United have kicked on since last year and the likes of Millwall and ourselves have suffered with injuries this year, which has really hampered us and only now have we really kicked on and shown the potential we have got.”
Those injury issues seem to show no sign of abating, but the gaffer has been pleased with the squad’s efforts to step up to the plate: “When you have injuries, you are desperate for that gap to come to get everyone back fit.

“It is not easy for any team in this league to absorb five or six injuries and that is where we have found ourselves.

12 December 2018
“A lot of credit has to go to the squad for how we have coped with that. To do what we have done in the last 11 games, considering a lot of the players we have got missing speaks volumes of the work the guys have done.”
One player who stepped in when another player was lost to injury was on loan forward Lukas Nmecha, who moved out to an unfamiliar role on the wing, but impressed the manager with his efforts.
“I though Lukas was fantastic when he came on. It will be a position that will be quite foreign to him.
“We needed him to go on and put quite a mature performance in and I thought he did that. He created the goal; he did all the hard and ugly work off the ball that you would hope that he would do and he carried a real threat with his athleticism and running power, so I was delighted for and with him at what he could do for us.
“I thought we had a performance at Forest – which was always good to be a hard game for all of us – where it was hard to pick anybody out, as they worked their socks off and got what they deserved, which should give us confidence for this game,” he added.