7 December 2018
The North End boss had the Reds’ top scorer play under him at Carrow Road and says that his signing to the City Ground is part of a change of approach from the former European Cup Winners during last summer.
Speaking to iFollow PNE as he looked forward to the game, the North End boss thinks the change to an experienced squad is something they are reaping the rewards from.
“For the last four or five years, Forest have been of a similar ilk to Preston North End, in terms of bringing some young players through, the likes of Joe Worrall, Ben Brereton, Ben Osborn and Matty Cash and these type of guys, but then they have chosen to go down a different route this season,” he said.
“They have shipped Joe Worrall out on loan, they have sold Ben Brereton and some of the other lads are perhaps not playing as much as they did in the past.

“That is because someone else has come in and decided they are going to go down a different route and they have bought really experienced players – the likes of Lewis Grabban, Ben Watson, Guedioura – they have an experienced and strong squad.

6 December 2018
“It is going to be a difficult match. Our injury problems are well documented and with Aitor there, they have someone who is experienced at getting teams out of this league. What he has done is assemble a squad with the knowledge and knowhow of how to get out of it.
“Style always refers to the type of players you have available. They bought their Portuguese No.10 who cost about £15m, so they have plenty of quality in their team.
“I had Lewis [Grabban] before, who scores goals at this level and is a really, really good player and I think he is a real talisman for them. If you look at their bench as well, with the likes of Daryl Murphy, they have real options, but their playing style revolves around those players as much as anything else.”
In terms of his own team, with the aforementioned squad availability issues the gaffer is currently facing, it has not helped preparations, but irrespective of who is available, he says they must improve on their last performance.
“We had put a good run of results together and were looking at this next batch of games in a confident mood - when you lose two, three or four players it is really tough, but when you lose five, six, seven or eight then it becomes even more difficult,” he continued.

“We are really stretched at the moment. Young Jack Baxter was on the bench at Birmingham last Saturday. We are just hopeful we can get some players back. 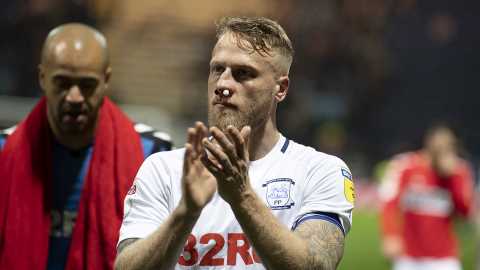 6 December 2018
“From the team we fielded against Bristol City, in probably our best away performance of the season, six players were unavailable to start last weekend, so it has not been easy, but we have to try and play better this weekend than we did last weekend.
“The players we are missing are the guys who set the standards and have done it; they know what it takes to do it. It is unfair on some of the younger lads, who maybe signed in the summer, who are being accompanied by five our six other guys who are trying to make their mark on the team.
“It is always nice when you are trying to bring players in and bed them in, when nine other guys have been playing regularly and know their jobs; it is doubly difficult to bed them in when five or six others are doing the same thing at the same time.
“But we what we need to do is try and make sure our levels are at a high standard and get our other lads back as quickly as we can.
“It has been tough to get a lot of work done this week, because of the number of injuries we have had. The kids having their youth cup tie has meant we have also not supplemented with their players, which we would normally do.
“Our numbers have been limited, but we will work hard in the next couple of days and use that to prepare properly for the weekend.”