Manager Alex Neil was delighted to see his side take three points on an afternoon where he thought they were not at their best. 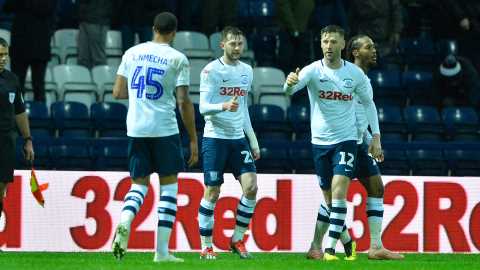 15 December 2018
The PNE boss spoke to iFollow PNE after the game and said that winning the game was the only factor worth considering after his side triumphed 3-2 over Millwall at a cold and damp Deepdale.
Alan Browne’s seventh goal of the season, followed by strikes from Tom Barkhuizen and Andrew Hughes have the Lilywhites another home win, making it just one defeat in the last 12 games.
Speaking after his side’s latest triumph the gaffer said: “I think over the season what you get are some games where the result is the most important thing, rather than the performance.
“I thought the first half performance was okay, I thought we moved the ball quite well and we had two moments of quality with Gally, where his passing opened them up and we got two goals.
“In the second half I really expected us to come out and do well and I think we actually started the first five minutes well and then after that we made poor decisions. We didn’t win enough headers, we didn’t pick up enough second balls, the ball didn’t stick at the top end of the pitch for us and it wasn’t a great performance, but we did what was required to win the game.

“There are certainly bits in the second half we need to look at and improve, but at the end of the day we are on a really good run, the lads have worked really hard and you are not going to play well all the time. I don’t think the conditions helped either.”

After what was a tight first half hour, two goals in five minutes before the break proved decisive and the PNE chief was pleased his side found a way to unlock the resolute Lions back door.
“Patience was key in the first half,” he continued. “When teams come and sit behind the ball and make it difficult you have to be.
“We were criticised a lot last year for not being able to break that down, which is fair, because we couldn’t, but that is another three goals we have scored again today, so we are not struggling in the creative department and that is up with a lot of forward players missing.
“Today, trying to affect the game from the bench became difficult, because Graham Burke is a No.10, Ethan [Walker] is 16 and at the stage of the game we were hanging on a little bit, it wasn’t fair to chuck him on. You want to put him on in a different environment – a positive vibe – so that he can get himself into it and grow into the game.”
Paul Gallagher proved the key to that, two more assists from the experienced No.12 and the manager felt he influenced the game and ultimately his side had enough chances to win by a more comfortable margin.
“Paul had a bit of a mixed bag today. He gave the ball away twice on the edge of the box, but we know he has that quality.

“He is a good lad; he works really hard and he has been one of our stalwarts. We rely on him a lot and he has come up trumps again today.

“We had enough chances, but there are certainly bits we can look at from today that we are disappointed in, but it is nice to be disappointed when you have won the game rather than be disappointed because it has cost you the game.
“We will try and improve those bits, but with one loss in 12 games, it has been great from the lads and that’s with the injury problems we all know about. With those lads to come back and to do what we are doing at the moment is really pleasing,” he added.