Preston North End manager Alex Neil says that the festive fixtures are all about results and is not concerned with performances if his side can earn the three points.

24 December 2018
Speaking to iFollow PNE ahead of the Lilywhites’ Boxing Day clash with Hull City at Deepdale, the North End boss said that he would like for his side to perform at their best, but would be just as happy to grind out wins during this period.
“For these games coming up it is more about us trying to win the game than anything else,” said the gaffer. “Although we want to play well and show everybody how good a team we can be, that is more difficult when you have key individuals missing, which we have, but we will be looking to try and win the match.
“It is a crucial game for us and we have to make sure we try and get back on it as quickly as possible. Saturday made that difficult, because we went down to ten men, because I believe that if we didn’t go down to ten men that we wouldn’t have lost that match.

“Our form at home has been very good, we have scored quite a few goals. I am hoping that we can try and continue that and if we can play as well as we have done in a lot of the games at home, then hopefully we can get a positive result.” 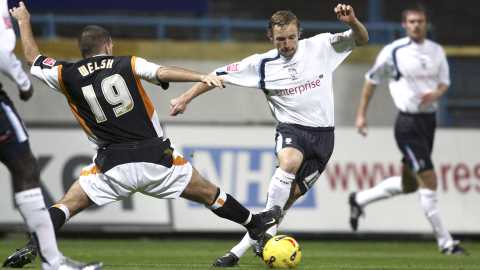 24 December 2018
The second half of the season begins with this fixture and thus the match is a reverse of the 1-1 between the sides at the KCOM Stadium two months ago, one that Alex felt was a game where his side got something from a performance that didn’t perhaps warrant anything.
“I am not sure we deserved it on the day,” he continued. “It is probably the one game this season where we have got something that on the basis on play I thought we didn’t deserve.
“I thought they had better chances than us; we didn’t perform well enough – it was one of our poorest performances this season.
“They have definitely got quality. People talk about Hull as if they are a team that are struggling, but if you look at their squad, the majority of them have played in the Premier League, so they have got a good squad.”
The Tigers picked up a positive result going into the festive period with a 3-2 home win over Swansea City on Saturday evening and the manager is well aware of the quality Nigel Adkins has at his disposal.
“I have watched bits of the game and I thought Swansea were really unfortunate and probably should have been two or three up, but the Hull – as we know – keep going and they managed to have a real ten-minute purple patch where they scored three goals and came away with a really good win.
“Swansea have also got a lot of players who have been in the Premier League, so they will have been delighted with that, because I think Swansea are a difficult team to beat, especially if they play well on the day.
“If you have Grosicki, Frazier Campbell, Evandro, Chris Martin, Dicko and Bowen, there is quality there – there is no question about that. They have players we are going to have to keep quiet. They have players who can change the game and they have players who can score goals, but so have we.
“We are going through a difficult spell in terms of injuries at the moment, so that is going to be tested quite a lot, but that will make for a good game. I am sure they will come here full of confidence, having got that win, we have our own things we need to contend with, but the team that takes the pitch should be more than capable of putting in a good performance,” he added.