Graham Burke said he and his Preston North End team-mates could be satisfied to take a point from their final match of 2018 against Aston Villa, but felt they might’ve had more had luck been on their side.

The Lilywhites had already struck the woodwork early on when Tammy Abraham converted just before the break for Villa, and did so again via Tom Barkhuizen in the second half, only moments after Lukas Nmecha scored his first goal for the club to equalise in the 1-1 draw at Deepdale. 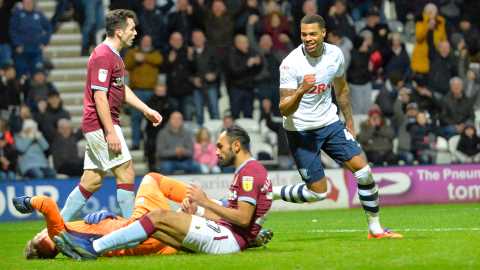 The Man City loanee also had the ball in the net in the first half but was adjudged to be offside, and with Barkhuizen and Ryan Ledson seeing penalty appeals waived away as well, Burke suggested North End’s one point might have been three but for some fine margins and key decisions going in their favour.

“Obviously, it’s difficult with all the injuries and boys coming in that haven’t played a lot of games, getting an opportunity to go out and play,” Burke told iFollow PNE post-match.

“I think everybody on that pitch from one to eleven put in a shift today and I think we deserved something or probably more from the game. You take a point given the situation that we’re in at the moment and all round, it’s a good team performance.

“We didn’t probably get the rub of the green today and in some games you need that bit of luck. But you think about all the chances we had coming off the post and the ‘keeper making good saves, it was just that little bit of luck we needed but today we didn’t get it.

“Jordan [Storey] gets on to a great set play from Gally [Paul Gallagher] and unluckily enough, it comes off the bar. Barks’ one just wouldn’t sit for him, you’re looking at it and thinking ‘just come down, just come down’, but it didn’t come down for him.

“If that went in, I think we would’ve gone on to win the game because today, I think we defended superbly.”

Burke was pleased to retain his place in the side, having started in the home encounter against Hull City three days previously, and hoped the side could carry their performance levels from facing The Villains into the next game against Rotherham United on New Year’s Day.

“We showed a lot of character going in 1-0 [down] at the break, it’s always a disappointing time to concede a goal; just one minute before half-time. But I thought we came out in the second half right at it, we got ourselves back in it and we could’ve gone on to win it.

“Last game, I was disappointed in my own performance. Today, I wanted to try and make it right and just go out and try to play my game. Obviously, I played in a normal position for me which I felt more comfortable in and I was pleased with how today went.

“We were coming off the back of two defeats and we didn’t want to make it three, so we had to go out and try to win the game, which we did [try to do]. We’ve got a point, you take that and it gives us a bit more momentum and obviously we can take confidence away from that performance there today and we go into Rotherham New Year’s Day full of confidence and ready to go.”