Preston North End’s 18-year-old midfielder Jack Baxter is looking forward to his first run out at Deepdale, just days after being included in the first team matchday 18 for the first time.

Preston North End U18 vs Charlton Athletic U18 Match Preview

4 December 2018
The Lilywhites’ No.30 will be part of Nick Harrison’s squad for the FA Youth Cup third round clash with Charlton Athletic, being played at Deepdale under the floodlights on Tuesday night.
For Jack, like the majority of the Academy set up, it will be his first chance to wear the lilywhite shirt of the side he grew up supporting in competitive action at the main club stadium and he admits it has been a long build up since the draw was made a couple of weeks ago.
“I’m looking forward to it and I know everyone else is,” he told iFollow PNE as the youth team completed their preparations for the game at their UCLan Sports Arena training base.

3 December 2018
“It will be a good chance for a lot of the lads to play at Deepdale for the first time. A lot will be nervous, but I am sure they will overcome it and be able to play well and get the result we want.
“It is important for the lads that have had the opportunity to be in and around the first team to help the other lads, to be leaders on the pitch and to try and help with nerves and try and lead the team.”
Jack’s involvement on the bench for the first team at St Andrews on Saturday comes six months after he signed his first professional contract – a two-year deal - for his boyhood club in the summer and he was delighted to achieve on of his dreams at such an early stage of his career.
“It was very good. I enjoyed it,” he continued. “I was very nervous in front of the Birmingham fans, but it was a good experience, especially leading up to this game, it really helps.
“You always aspire to get on the pitch and be involved and play with the club you support and I enjoyed it.

“It has been a good year for me, a hard year, but I need to keep moving forward, working for opportunities and if those opportunities come along, make the most of them.” 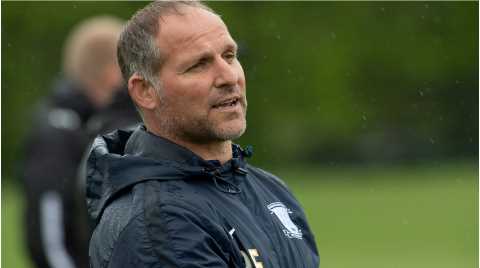 3 December 2018
Whilst the central midfielder has warmed up with the first team at PR1 before, as previously mentioned, for many it will be their first opportunity to get on the hallowed turf and there are two things that Baxter feels they must cope with, the size of the pitch and the size of the support they are playing in front of.
"It’s a massive pitch and we will need to use the squad. There will be opportunities for everyone involved to play their part and make an impact and hopefully someone can win us the game.
“It is important for everyone to make an influence on the game, because we won’t win it as individuals, if we are going to win, it will be as a team, but it might be that one or two players playing well win us the game.
“I’ve got quite a few friends and family coming to the game and they take it as a good opportunity to watch me playing and I am sure the other lads will be the same.
“It will be the biggest crowd a lot of the boys have played in front of and how you handle that can affect your performance, but I am sure we can deal with it,” he added.