Declan Rudd admitted he was delighted to get back on the pitch and help Preston North End revitalise their positive form with the 1-0 win away at Nottingham Forest.

The Lilywhites had a nine-game unbeaten run halted at Birmingham City last weekend, Rudd making an error for the opening goal in that game.

Alex Neil stuck by the ‘keeper, however, retaining his place in goal at the City Ground and North End’s No.1 hoped he had repaid the gaffer’s faith in helping the team to a clean sheet, making one particularly vital stop to keep out a Daryl Murphy header late in the second half. 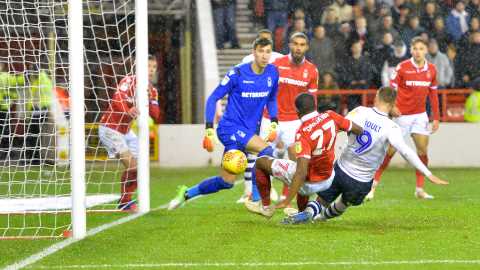 “You need support from the gaffer and he showed his faith in me today and that means a lot as a player when it doesn’t go right for you,” an honest Dec told iFollow PNE post-match.

“He [Alex Neil] could easily have changed it and I probably didn’t deserve to be out there today, but he kept with me and I had to make sure that I paid him back and also paid my team-mates back after letting them down, which is probably what hurt the most.

“They battle and do everything they can and as a goalkeeper, when you make a stupid mistake, you feel like you’ve let them all down. It’s good to get out there today and have a clean sheet and once again, they [the players] were tremendous.

“It’s a game of football, it’s a mistake, no one died – that’s the way you’ve got to look at it, there’s a lot of other things going on at the moment that are more important to me than worrying about a mistake. Once you’ve made a mistake, it’s gone and you can't worry about it. My focus was always on getting back out there today and proving to everyone that it was a mistake.”

On that stop to deny Murphy, one of Forest’s better chances in a game which saw North End defend so resolutely, Rudd explained producing the stops is part of parcel of his role, going onto praise the defenders in front of him, with Ben Davies among those receiving praise for his marshalling of another of the opposition’s frontmen, Lewis Grabban.

“It was probably one of their only real attempts,” Rudd continued, speaking of his diving save to tip away Murphy’s header. “They had a few half chances, but it was one of the only real goalscoring opportunities that they and that’s my job [to make saves]. I find them harder to save when they’re rolling back to me at the minute than out of the top corner!

“It was nice and the best thing was the reaction from the lads after the game, they knew how disappointed in myself I was last week and they made sure that they all told me ‘well done’ and that made me feel better today. But like I said, it’s my job, that’s what I’m out there to do and it was nice to keep another clean sheet.”

“I think Ben’s a top, top player and we’re going to have make sure we keep hold of someone like him because he’s a very, very key part to our squad.

“I think he [Davies] did the same at Aston Villa last year, he kept him [Grabban] quiet there and he got the penalty which gave them a point at their place. It just shows the quality player he is, he’s been out of the team for a couple of games and the manager puts him back in and he goes and performs like that.

“All credit to him and like I said, he’s an outstanding young player who’s only going to get better, which is good for us.”

Watch the full post-match interview with Dec on iFollow PNE by clicking on the video above.