Preston North End’s latest signing, Billy Bodin, is excited to be joining up with his new team-mates and to test himself in the Championship. 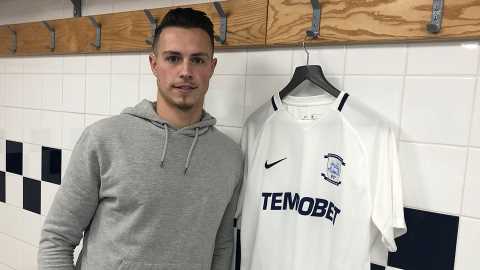 The 25-year-old forward signed a two-and-a-half-year deal on Wednesday night and could go straight into the squad for the weekend’s FA Cup tie at Gareth Ainsworth’s Wycombe Wanderers.

And the new No.39 is hoping to settle straight in: “It is something I have always wanted to achieve, to play in the Championship, and for me it is a great level of football and hopefully I can come in and help the team as much as I can,” he said.

“There was a bit of talk about a move in the summer, but Bristol Rovers turned that down, but thankfully I have had a pretty good start to the season and the deal is now over the line and I can concentrate on my football.”

He arrives at Deepdale with goals galore already under his belt this season and hopes to add to the 11 and four assists gained in his first 24 games of the campaign.

“The last two seasons I have got 13 goals in both seasons and about seven or eight assists, so be close to that already this season is a good achievement for me and hopefully I can continue to do that and help the team,” he continued.

“The Championship is a great level of football.

“There are a lot of massive teams in the division and I believe that when I have watched the lads play, that they play a style of football that suits me and that I can come in, gel with the lads, and help them progress and who knows where we can be at the end of the season.”

The Swindon-born player is excited by what North End manager Alex Neil has said to him before signing: “I like what the manager had to say. He has been to watch me a few times and thinks I will fit into the style of play at this club.

“I can’t wait to get started. It could be my first game at Wycombe this Saturday, which will be a good Cup game, and hopefully I can get straight into the action and help the lads,” he added.

To watch the full interview with the new man on iFollow PNE, click on the video link at the top of the page.