This weekend’s Emirates FA Cup fourth round tie at Sheffield United will be officiated by a top flight referee.

Graham Scott, who took charge of Tuesday night’s Carabao Cup semi-final between Bristol City and Manchester City at Ashton Gate will have the whistle for this game at Bramall Lane.

It will be the Premier League official’s 20th game of the season, and he has been quite lenient with the cards so far, issuing just 45 cautions and three red cards, two of those coming in the Emirates FA Cup third round replay between Chelsea and Norwich City at Stamford Bridge last week.

The Oxfordshire referee is now in his tenth season on the EFL and PL lists, but hasn’t been a regular doing either the Blades or the Lilywhites down the years. 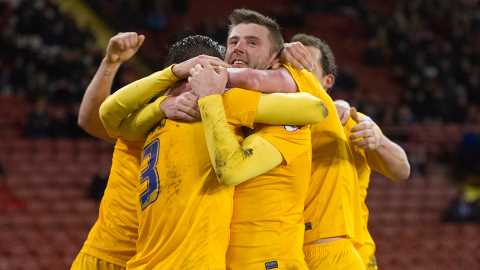 His only visit to Deepdale came back in March 2012, a goalless draw with Scunthorpe United, whilst his only other game in charge of North End came in last season’s trip to the Cardiff City Stadium.

He has refereed our hosts on three occasions, but never at Bramall Lane, with a defeat at Walsall the same week as our game with Scunthorpe in 2012, a win at Chesterfield in 2016 and a draw with Charlton Athletic at the Valley last season in November 2016.

He will be assisted on the line by Richard West and Anthony Da Costa, whilst the fourth official will be experienced EFL match official David Webb.