After completing a move to Deepdale, young striker Connor Simpson is looking forward to developing further at Preston North End.

The 17-year-old became the latest signing to join Alex Neil's squad on Thursday, and Simpson admitted that the number of young players getting a chance at the club was a big factor in his decision to join the Lilywhites. 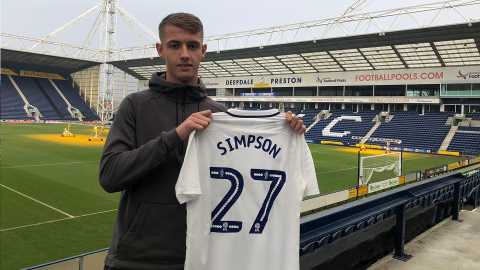 Speaking to iFollow PNE on his move, Connor said: “It’s a very good club to come to, it has a lot of history behind it and I am really excited to get started,” Simpson said.

“The pathway at Preston seems to be good so it is a great chance for me to do well.

“The biggest factor for me deciding to come here is the amount of youth players that come through at Preston.”

The striker is looking forward to working alongside another former Hartlepool forward at Deepdale in Jordan Hugill.

"He's a good striker and I will learn a lot from him, the way he plays is similar to the way I want to play. He's quite a big lad and I think he will really help me develop and progress as a young player."

The talented striker will join up with his new teammates at Springfields for the first time on Monday.

Hear more from Connor on iFollow PNE now by clicking on the video above.