Jack Baxter has enjoyed being a part of the pre-season campaigns of both the first team and youth teams this summer.

The 17-year-old has been in the matchday squad for three of the senior squad’s summer friendlies and has played the same amount of matches with Nick Harrison’s U18 side, the latest of which a 74-minute outing in the 1-1 draw against Sheffield Wednesday.

Being among the first team squad also meant Baxter was among the travelling party to Fota Island in Cork for Alex Neil’s squad’s pre-season training camp, alongside fellow youth team players Adam O’Reilly and Jimmy Corcoran, and the midfielder has been pleased with his involvement thus far.

“Going to Ireland was good, we did some team bonding and it was just good to get away,” said the Chorley-born midfielder. “It’s a different experience and it’s always good to do something new.

“Pre-season has been very hard, it’s very intense all the time but you just have to try your best. I do feeling training with them [the first team squad] last year has made me feel fitter this year and it has helped coming into games now as well, so I just want to continue doing that.

“It’s been good to come back playing because I’ve not played as many matches as some of the other lads. But every time you play it’s a good feeling, I just enjoy playing.

“They [Sheffield Wednesday] were a good side but we played well, we moved the ball well and created a lot of chances. I feel we maybe should have scored another and Mikey [Howard] was unlucky to hit the post, but all in all we did alright and maybe the draw was an unfortunate result.” 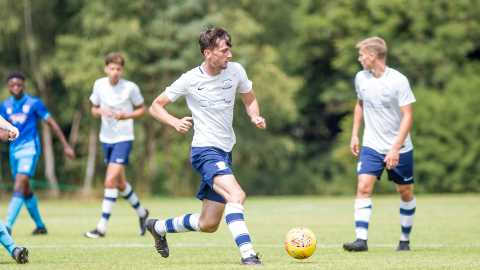 Baxter believes his match fitness is improving and is confident he and his youth team colleagues will be in peak condition come the first EFL North West Youth Alliance game against Wigan Athletic next weekend.

“Obviously, every time you play a game you want to win, but you look at both things [result and performance]. But particularly in pre-season, it’s just about getting as much as you can out of the game, so you always want to win but pre-season is slightly different.

“I feel I’m getting there in terms of match fitness, I maybe need another game or two to get me up to a full 90, but I think in the first game of the season I’ll be ready to do a full 90 minutes if needed.