Manager Alex Neil felt there were plenty of positives to take from the Lilywhites’ pre-season encounter against Burnley at Deepdale.

North End battled against the Premier League side with the scores level at 2-2 heading in the final ten minutes, before visiting forward Dwight McNeil popped up with the winner six minutes from time.

Josh Harrop and Callum Robinson had both scored fine goals, the former to open the scoring and the latter to equalise with 15 minutes remaining, with Sean Maguire providing the assist for both.

And it was PNE’s promise which was among the aspects of the game with which the manager was particularly pleased in the second pre-season affair in PR1 in three days.

“I thought it was quite an entertaining game obviously with the five goals,” Alex told iFollow PNE.

“Josh Harrop took his [goal] really well, he took it early and quickly, which was a good finish. The next one is a great through ball from Seani [Maguire] that I’d like to see him more on the end of than some of the other players, but it’s a good through ball for Callum who tucked it in well.

“We had a lot of attempts at goal, a lot of good opportunities in and around the box and if we made some better decisions, we could have created more chances.”

“I think our disappointment was the second two goals we conceded were a bit sloppy from our point of view, one was a second phase free-kick which was unnecessarily given away and then for the second, we’re on the counter and lose the ball in a silly area. Then we sat too deep and the lad manages to get a header in. But I thought all in all, certainly in the second half, the game improved.”

The boss was pleased to some positive individual displays from his players in a game which allowed to him try to some new combinations among his players, with an almost entirely changed starting 11 taking the field from Saturday’s draw against West Ham. 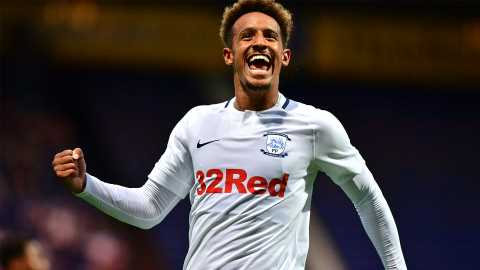 “We had a chat at half-time about some things I thought we could improve on and I think we did, we really took the game by the scruff of the neck.

“I thought [there was] a lot of decent performances. Obviously, some of the new lads again featured which is good to get them minutes and get them used to how we work and what we try to do, so it was a good exercise.

“[We were] just trialling a few things as well, different combinations, different players. We put Louis [Moult] and Sean up front for a spell and then obviously just protect Sean because his figures were sky high. Josh Harrop, I thought had a good game as number ten, Andrew Hughes was much better second half, so I think there are a lot of positives to take.

“We wanted to [give the players] as many minutes as we can and avoid injury, but getting the team ready and prepared for what comes is the most important thing.

“I think we’ve faced a variety of different opponents and we’ve got another different one coming up on Saturday against Oldham, that should set us up nicely for the season.”

Watch the gaffer's full post-match interview now by on the video at the top of the page.