The youth team rounded off their pre-season schedule with a 1-1 draw against Blackburn Rovers.

Darren Brannigan cancelled out Sam Burns’ opener for the Category One visitors, earning North End the draw in their final 90-minute pre-season outing.

The Lilywhites started the contest well and had the game’s first effort on target through skipper Adam O’Reilly on nine minutes, to whom the ball fell kindly after Jack Armer’s left-wing cross was cleared, his shot comfortably into the grasp of Rovers stopper Ben Winterbottom.

However, the visitors did take the lead after 12 minutes. North End looked to be on the attack when Jake Garrett plucked a ball out of the air down the left, playing it forwards for a trialist. He then cut inside from the left and found Burns in the box, whose effort nestled inside the bottom right corner.

North End were not dispirited by going behind, however, with the home side looking particularly threatening from corners. Ethan Walker, who was celebrating his 16th birthday on the day, delivered for Charlie Lyons to head just wide moments after the goal, while Brannigan had the ball scrambled away from him one-on-one in the next attack.

Lyons got his head on a Mike Howard corner before the 20-minute mark with Precieux Ngongo just unable to prod it home ahead of a defender clearing, as O’Reilly miskicked an effort from the subsequent corner. 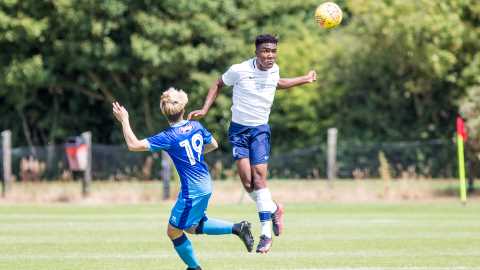 Walker sent in another corner from the left midway through the half but Brannigan headed wide.

At the other end the combination of trialist and Burns provided another opportunity for the latter, whose header goalwards was comfortably saved by Corcoran.

After 34 minutes, North End were deservedly level. Josh Pollard played a perfectly weighted pass to the right byline for Howard to cross it first time, his delivery pinpoint for Brannigan to head back across goal and into the bottom right corner.

Walker almost scored a fine second for the Lilywhites before the break as the ball dropped to him from a corner, the young forward curling his shot just wide of the far right corner.

The second half was a much quieter affair by comparison, perhaps unsurprisingly given the intensity with which both sides played out an entertaining opening 45 minutes.

Rovers did provide an early test for Corcoran, though, Luke Brennan shooting low and straight at the PNE ‘keeper from outside the area.

Brannigan won back possession in Rovers’ area nine minutes after the restart and chipped it up for Tyrhys Dolan in the centre, who sent a shot on the bounce over the crossbar.

Walker volleyed over from a Lewis Simmons cross and Mike Howard then shot straight at Winterbottom from range, those efforts coming either side of the hour mark.

A number of substitutions from both sides interrupted the rhythm of the game, with few clear chances coming to fruition thereafter.

Lyons did have a header ruled out for offside in the final minute of normal time but the scoreline remained unchanged in the second-half with the Lilywhites finishing off pre-season with a draw.

Nick Harrison was pleased with his side’s performance and praised the move which led to a fine equaliser.

“I thought it was a really competitive game, especially in the first-half,” said Harrison. “It was a really enjoyable game to watch from the sideline, I’m sure the spectators thought that too and we were really pleased with the way that our players competed and performed for the duration of the game.

“Whether it’s a pre-season game or not doesn’t matter, it was competitive and I thought our players played their part in it. They passed the ball well, worked hard out of possession and I thought we created a number of chances.

“It was good interplay [for PNE’s goal], we passed the ball quickly, we had runners into the box and it’s a great ball in and a great finish. It’s just a proper goal, there was no mistakes from their team.

“The goal was one of our making in terms of how we passed it and how we moved and that’s important because if you want to break down teams with good players in them – because that’s what Blackburn have – that’s how you’ve got to move the ball.

“I’m really pleased with how we scored the goal and going into the second-half, I thought we had a couple of half chances where that final ball wasn’t quite there and we could’ve ended up winning the game if we had taken those chances.”

Heading into next weekend’s league opener against Wigan Athletic, Harrison has full confidence in his group of players following a productive pre-season campaign.

“I’m delighted with the group, not just the starting XI. I think the second and first years have come back in really good shape and they’re willing to learn which is important as they still have a lot to learn.

“We’ve used these pre-season games to instil a lot of tactical information into them and also to give them their match fitness, so hopefully come the first game of the league season next Saturday, that will benefit them.

“We’re delighted with every single player in the group and ultimately, it’s down to how they perform between now and the end of the season if they want to further develop as a player and progress in their career.”