Darren Brannigan scored as the Lilywhites drew 1-1 in the local derby affair, with Sam Burns having opened the scoring early on in a particularly lively first-half.

Ngongo, from Blackburn and formerly of his hometown side, felt the intensity of the game and the rivalry between the sides made for an ideal final friendly before taking on another local outfit in Wigan Athletic in next weekend’s first EFL North West Youth Alliance encounter. 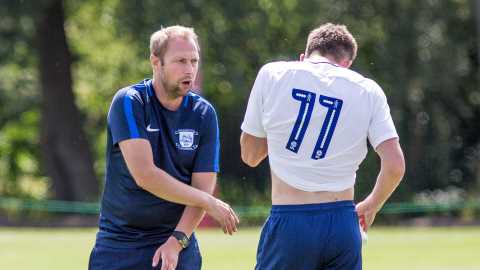 “It was a very competitive game because it was the last proper game of pre-season and both sides were really at it,” said the 17-year-old.

“It was very quick on the pitch, everybody was up for it and I think it’s because both sides are close together, so that helps as well with it being a derby, both sides wanted to win and both really went for it.

“It felt like a rivalry 100 per cent because both sides definitely wanted to win. I think 1-1 was a fair score at the end but no one wanted to lose that game. It was good to play against them but obviously I’m playing for Preston now and so I was fully concentrated on beating them.

After another 70-minute outing, the defender explained that the summer break and subsequent pre-season campaign has helped him to prepare for the new season, and that both he and his fellow teammates are feeling confident ahead of the competitive action recommencing next weekend.

“I feel that with the more games I’ve played, the fitter I’ve become and I have that match fitness now. I think I’m ready and prepared now for the first game of the season next weekend against Wigan Athletic and I’m feeling good.

“Last season wasn’t the best one for me, but the two months away has helped and I’ve worked on some things that I’ve been told to work on. Now obviously I’ve come back, I’m feeling fresh and ready to go again, so hopefully I can start in the first game of the season and go on from there.”

“I think we’ve taken each friendly game as it comes and we’ve done the training with Nick [Harrison] and Fenners [Andy Fensome] who have told us what they want us to do. As soon as that game comes next week, we’ll be ready for it.

“The team is very confident and everyone knows how we want to play. We’re all confident playing the ball out from the back and we all know we’re a very strong team.

“We’ve got quick players up front so we will press teams and make it hard for them and difficult for them to play it. We’re all feeling good, we’re all very confident and we’re raring to go now.”