The youth team put in a well-rounded performance as they drew 1-1 against Sheffield Wednesday in their sixth pre-season outing.

Darren Brannigan handed the Lilywhites a dream start by scoring in the first minute, with that lead still deservedly intact as the half-time whistle blew.

However, the visitors equalised just after the hour mark with the two teams having to settle for the draw.

There was just 52 seconds on the clock when the Lilywhites first took the advantage as Brannigan kickstarted and finished a fine move.

The forward regained possession close to the halfway line, held it up and laid it wide left for Ethan Walker. He then carried it forwards to the edge of the box where he played the return pass for Brannigan, who took one touch just outside the area and converted into the bottom right corner.

Wednesday looked to draw level immediately with a spell of prolonged possession but the Lilywhites continued to have the better chances, Tyrhys Dolan twice going close either side of ten minutes, skewing just wide on the bounce, then cutting in from the left and shooting straight at the ‘keeper. 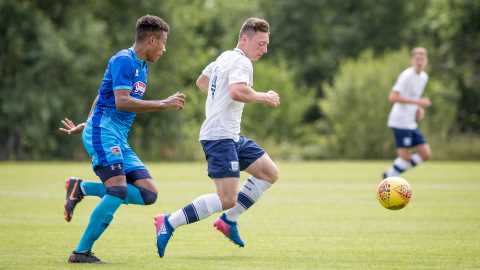 Baxter Glad To Play His Part In Pre-Season

Precieux Ngongo then nodded over from Walker’s corner, while a Wednesday midfielder opened himself up well at the other end, curling a shot just over the top right corner.

Both sides created good openings in quick succession but were unable to convert, Mike Howard crossing from the right for Walker at the back post, who couldn’t connect with his volley, while a Wednesday forward miskicked in the box at the other end.

Walker went closer moments later with a long-range strike drifting marginally wide of the bottom left corner, that just before North End ‘keeper Jimmy Corcoran had done well to block a right-wing cross from deep inside his own penalty area.

Lewis Simmons was involved at both ends in the closing moments of the half, first clearing a Wednesday corner off the line, before seeing his snapshot deflect onto the side netting.

There was less of a controlling element to both sides’ play following the break, although fewer chances came, too. However, Howard forged a brilliant one for himself ten minutes after the restart, latching onto an overhit pass to a defender and shooting first time onto the bottom right hand post.

It proved an important moment, as the visitors equalised shortly afterwards in the 62nd minute. The Lilywhites failed to deal with an in-swinging cross into the box from the right, allowing for another – this time lower – delivery to be made from the opposite side, leading to a side footed equaliser.

Wednesday could have scored again four minutes later when the left-back’s right-footed ball into the box found the substitute forward only yards from goal, but he did not catch it properly and PNE managed to clear.

Adam O’Reilly’s efforts from distance were the hosts’ best chances late on, his first hit going across goal and tipped wide by the ‘keeper, before another strike deflected into Dolan’s path, who shot into the side netting.

The visitors twice threatened to win it in the dying moments as one opportunity went to waste with the forward dithering on the ball for too long, his shot ultimately being blocked, while another strike from further out did find the top corner – albeit after PNE had already been given a free-kick.

That meant proceedings closed with the scoreline at 1-1 and Academy manager Nick Harrison was happy with his side’s performance against the Category Two academy.

“I thought it was an excellent performance in a very competitive game, which we knew [it would be],” he told PNE.com. “I’m really pleased with the players’ fitness and their ability on the ball.

“It was a competitive, even game and both teams had spells where they were on top. It was a little bit too frantic at times and we spoke to the players about controlling [the game] when we had the ball and when we didn’t have it.

“Maybe a draw was a fair result, but we had chances to win it which is pleasing.”

The Academy boss also reserved praise for goalscorer Darren Brannigan following his return from a serious injury suffered at the back end of last season.

“Darren’s deserved that because he had a really a tough injury at the end of last season. We’ve limited his minutes a little bit working up to now, simply because of the injury last season where he had a major operation.

“We’re delighted he got his goal and on top of that, I thought his performance in the first-half was very good. Obviously, we rested him for the second-half so we can ease him in as much as we can but it was a great goal and an excellent performance from him.”

With the league season just around the corner, starting next weekend, Harrison is looking forward to putting out his first team in the EFL North West Youth Alliance opener against Wigan Athletic.

“It’s a little bit different at youth level; our first game of the season was against Morecambe [the first friendly] at the start of July.

“We look at it that the season has already started but as we build up to the league season, we want to look at who’s going to be in the starting 11 and then it’s up to the other players to develop and break through as the season goes on.

“This week is all about testing the players and we look forward to putting a starting 11 out in the first league game.”