First year scholar Tyrhys Dolan took plenty from the experience of facing and playing alongside more experienced players in the youth team’s 2-1 defeat against Colne.

The young forward was the only scholar to complete 90 minutes in East Lancashire in a North End side which included Marnick Vermijl, Andy Boyle, Kevin O’Connor and Ben Pringle.

That quartet were taken off with fewer than 20 minutes remaining as the young Lilywhites went on to lose the game, having held the advantage until that point.

For Dolan, it was a fine opportunity to learn from those around him. 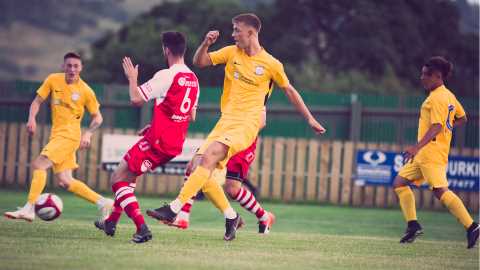 “They’ve [PNE’s first teamers] been training with us for the past few days now and it’s just made a big impact on the training and we brought that to the game,” said the 16-year-old. “It’s just made things flow a lot quicker and it’s just been a pleasure to play with them.

“When they play a pass in quicker, if your touch isn’t the best, they’re right on you. You watch them and you learn from them, you see what they’re doing and try to bring that into your own games as they’re our role models really.

“There was a massive change [in the opposition] in physicality, pace and also mentally. You’ve got to match them and try to beat them even if you’re years younger, you have to match them in every way. I think we did that in the first 70 minutes.

“The first-half was a bit more relaxed, we had the ball and it just seemed to be more in control. The second-half, towards the end, we had to adapt and work a lot harder to try to win the ball back and to score another one.”

Dolan said that for he and his young teammates, their focus following this defeat will be working on seeing out matches from a winning position.

“In the first 70 minutes, we were quite comfortably in control. When we made those changes, we struggled to keep up with the flow of a game and the changes knocked us a bit.

“We’ve got a few more friendlies against Middlesbrough, Sheffield Wednesday and Blackburn coming up and we’ve just got to learn from what we’ve done today and put that in perspective for those remaining friendlies.”