Youth team forward Ethan Walker is happy to be among the youth team squad on a daily basis now that he has begun his scholarship.

Walker first played for Nick Harrison’s side in February 2017 and has been heavily involved with the team ever since, finishing as the U18 side’s top scorer last term, despite still being an U16.

The Preston-born attacker is now three games into life as a scholar and speaking following the latest outing, a 2-2 draw against Rochdale, Walker said he is relishing the challenge of training every day.

“I’ve been looked forward to it [training every day] since the end of last season, I just couldn’t wait to get back and fit in with the lads again,” the exciting winger told PNE.com. “It’s been exciting and it’s definitely been worth the wait to come back and play.

“I’m feeling good, I was already feeling fit before pre-season started but going to Wales [for a pre-season trip] just topped that off for all of us. It’s made us realise just how fit we can actually become and from the two previous games I’ve felt fine and today’s been great for me, so I’m feeling good.

“It’s still pre-season and everyone is still getting fit and ready for the actual season that’s coming up. It’s just getting back into it that’s hard and fitting in again but I’m doing that fine and getting on with all the games that are upcoming.”

In the friendly draw against Rochdale, Walker was one of three young Lilywhites to complete 90 minutes, switching between the right and left flanks, having played 45 minutes in each of the previous two wins against Morecambe and Grimsby Town. 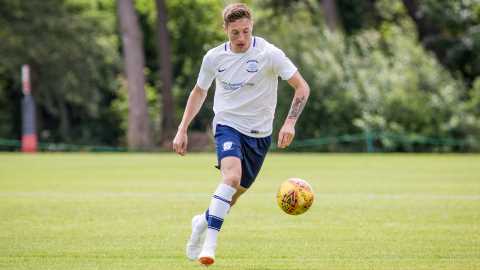 The additional playing time did not affect the youngster’s performance, however, Walker laying on the assist for Mike Howard to score PNE’s first goal and almost scoring himself early in the second half with an effort against the post.

“Rochdale provided a good test for us, they’re very physical and strong lads. That was hard for me because I’m quite small compared to them but it is a challenge and every game is a challenge, which is what we need to move forward.

“It’s different because playing on the left and right you have to change your game a little bit but I’m coping with playing on both sides and just getting on with what I have to do.

“It was a decent cross, I was just waiting on whether Jez [Jerome Jolly] was going to play it to the back stick or not but he did, so I ran past the defender and played it across for Mikey [Howard] who then finished it off the first goal.

“I had a chance but it was a little bit tight [the angle] and it also bobbled a little bit when it came up, so it was a bit gutting. From being about three yards out, it was disappointing not to score and put it in the net.”