A summer of optimism was also met with change as Alex Neil was appointed as manager just days into the pre-season training programme. The optimism remained and was only enhanced under the new gaffer.

Change was afoot with a shift in the playing philosophies, a high tempo possession based style of football was brought in by the new manager. The high energy and enthusiasm in the squad was harnessed and a pressing defensive style complemented the Lilywhites' game. An exciting and new-look PNE were getting to grips with the change in demands as the season got underway.

North End started the 2017/18 campaign at Deepdale, but the biggest priority in the opening fixtures was improving on previous starts of previous seasons; and Alex Neil's side did just that. 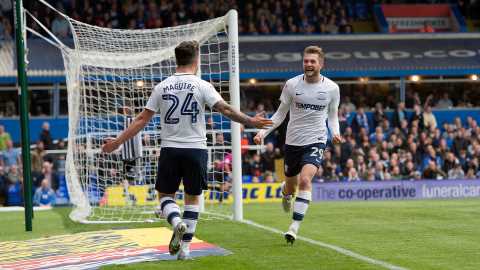 Play-Off semi-finalists of 2016/17, Sheffield Wednesday were the first to taste Neil’s style of football that was new to PNE. A dominating performance reaped its rewards for North End, with Daniel Johnson’s penalty the difference in a war of the roses.

Not for the last time in the season, or even in the opening month, a 1-0 scoreline would not tell the full story of the game; with PNE’s dominance deserving of more.

Interrupting the fledgling Championship season was Carabao Cup action for the Lilywhites with a trip to Accrington Stanley. A fairytale season for Stanley would get off to a dream start. Following up a 3-1 win in the league, they edged the first round clash 3-2 on a wet Tuesday night in Lancashire. A brace from Jordan Hugill in a rotated team – his second scored in extra time – was in vain, with Stanley’s eventual top scorer and talisman Billy Kee netting a winner in the final minutes.

The result did not stop PNE’s bright start to the season in the league, a solid performance at Elland Road yielded just a point against Leeds United in the first Championship away game of the season, but the performance was once again a sign of things to come under the new boss.

Another away game was next up, a trip to Pride Park as Derby County played host under the lights on a Tuesday evening. North End showed their versatility by using a three man defence but ultimately a Matej Vydra penalty meant that the Rams took all three points in the first league defeat of the season.

Back in PR1, the strong start got back on track. Reading were brushed aside although the scoreline may not have shown it, a sweeping cross from Tom Barkhuizen was cushioned down by the head of Sean Maguire at the far post for Hugill to control and slam home what turned out to be the winner.

Our opening month of Championship action in 2017/18 was rounded off with a goalless draw at Middlesbrough. North End were again the better side in the contest but the honours were shared at the Riverside, with North End denied on a number of occassions by an impressive performance from Boro 'keeper Darren Randolph.

August saw PNE pick up eight points from the opening five games, with North End close to an unbeaten month with two home wins and two away draws and just the one defeat at Derby County. North End ended the month sat seventh in the Championship table, outside of the Play-Offs by a point; conceding just one goal in those first five games, with four cleansheets for Chris Maxwell in the league.

Darnell Fisher was nominated for Player of the Month for his part in the four clean sheets, with a number of goal-line clearances against both Derby and Leeds clear evidence of his good form that wouldn't let off as the season progressed.