Heading into February, five games were coming the way of PNE. Three particularly tough games were bookended by challenging home games against teams fighting to correct their faltering form.

Beginning the month North End played host to Hull City at Deepdale. All of the goals came in the first half of the game and it was the Tigers who took the lead through a deflected Jarrod Bowen effort, which was diverted by Greg Cunningham past Declan Rudd.

Cunningham made amends just seven minutes later, the left back powered at a Paul Gallagher corner to net his first and only goal of the season. The comeback would be completed before the break as Billy Bodin was fouled for a penalty in added time in the first half. Alan Browne confidently stepped up and placed the ball in the back of the net with the winner. 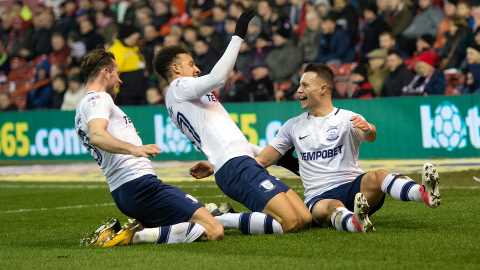 PNE then travelled to the capital to face Brentford, and although Griffin Park may not have always yielded the best results in the past for the Lilywhites, North End came away with a point for the first time since 2011; despite finishing the game with ten men. The game finished 1-1 but North End had the ball in the net twice, Tommy Spurr seeing his header ruled out for offside on his first start since September, which was unlucky as replays showed he was in fact onside.

The second time North End found the net it would count, Tom Barkhuizen’s cross from the left evaded Callum Robinson in the box and Daniel Bentley in the net to find its way into the corner. Seven minutes later a throw-in to Florian Jozefzoon was controlled and as the forward spun he unleashed a volleyed effort past Declan Rudd. There would be a tense final 15 minutes for the travelling North Enders as Cunningham picked up two yellow cards in quick succession but PNE held out for an important point. 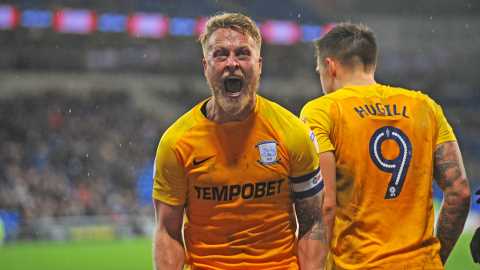 Next came what most would see as one of the toughest games of the season as Wolves, who were still maintaining a healthy lead at the top the league table, came to Deepdale. Although they ran out champions quite comfortably in the end, the two games against the Lilywhites showed that perhaps the gap in quality may not be too far. PNE enjoyed the best of the chances but the visitors were not without their own and the second half would provide the notable action in the game.

A brilliant curling corner from Callum Robinson whipped around the Wolves box and found Alan Browne who leapt highest to nod powerfully home. John Welsh saw red for two bookable offences and North End contested the away side for 35 minutes despite being a man down. Two minutes after the sending off, Wolves took advantage and were level through a breakaway and a couple of deflections, leaving Helder Costa the opportunity to finish off his run. 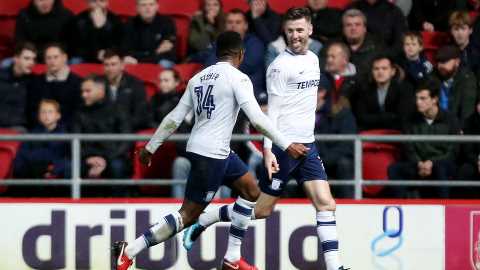 Fans wouldn’t have to wait long for their next taste of PNE action as Aston Villa were the hosts on the Tuesday night. The Lilywhites travelled to the Midlands to face the Villans with a healthy selection of defenders available this time around so it was bound to be a different game.

It proved such with PNE having the majority of the chances, several clear cut ones and were constantly a creative threat; as they were from corners. One corner resulted in the opening goal of the game, Robinson’s cross wasn’t dealt with and a loose ball gave Tom Barkhuizen the opportunity to try the spectacular. His overhead kick was parried by former PNE loanee and Preston-born stopper Sam Johnstone but it wasn’t enough to keep it out. 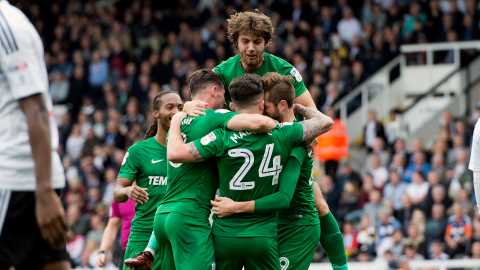 Barkhuizen would be involved in another set piece later on when the referee felt that a nudge on Keinan Davis was enough to award the hosts a penalty. Lewis Grabban converted the spot kick to snatch the three points from a travelling support of just under 1,000. Louis Moult also made his first PNE start for the club after taking time to get back to full fitness following his injury prior to his January switch from Motherwell.

The final game of the month saw North End suffer only their second defeat in 18 games in a scrappy encounter with Ipswich Town. Afforded plenty of respect by the visitors, PNE were invited to break down a dogged Ipswich defence that were content in keeping the home side out and seeking to break on the counter. Town did just that and that's how the only goal of the game came about, on the return of former North Ender Joe Garner to Deepdale. Garner was involved in the decisive strike, he held the ball up, laid it back into midfield and a long ball over the top saw Mustapha Carayol get to it ahead of the home defence, before beating the ‘keeper with a calm finish.

February finished with PNE sitting in ninth, the Play-Offs remained in reach following a win, three draws and loss in the month. Five points separated the Lilywhites and Sheffield United in sixth, with Bristol City and Middlesbrough in between PNE and the Blades. At this stage of the season, even Norwich in 14th couldn’t be ruled out of the battle for the top six, with only eight points being the gap, showing just how competitive the fight to remain in the hunt was; a fight that ultimately only PNE could win come the final day.