September would be an even more successful month than August for PNE. North End finishing the month unbeaten.

First up in September was a visit from Barnsley, a clash which saw Sean Maguire pick up his first competitive goal in a North End shirt and Paul Gallagher make his 500th competitive professional appearance. 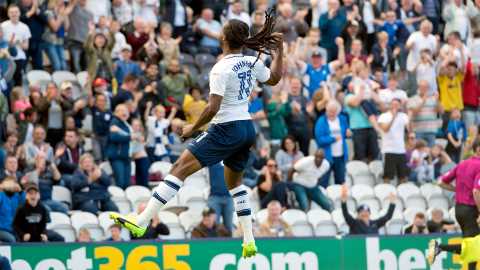 Smart work by Tom Barkhuizen down the left flank saw a floated ball lifted into the box for Maguire to nod home before Brad Potts equalised a few minutes later.

North End's performance once again deserving of more, and that luck would all change in the week. Eventual runners-up Cardiff City travelled north to Deepdale and were beaten with a dominant performance from Alex Neil's side.

Josh Harrop got the goalscoring underway, a clever free kick beating Neil Etheridge – the first goal for the former Man United man at his new home. Sean Maguire picked up where he had left off, receiving a Barkuizen pass before waiting and finding the net once more.

The Lilywhites had saved the best until last however. Alan Browne netted a 45 yard effort, the start of his own goal of the season competition with a number of superb strikes throughout the season - this one the eventual winner of the award at the end of season awards.

The Bluebirds contest also saw the return to action of John Welsh, who had endured 11 months on the sidelines through injury.

After three goals at home, North End continued to build momentum with three goals on the road. Birmingham City were this time the victims of an in-form PNE. Maxime Colin’s deflected effort put City 1-0 up at the interval, only for PNE to turn the game around in the second half.

An energised North End drew level through Daniel Johnson, who curled a shot into the bottom corner; enthusiastically celebrated given his history with City rivals Aston Villa.

Five minutes later and the comeback was complete, the high press in full force with Jordan Hugill benefitting from a Harrop pass to take the lead.

A third sealed the deal with a terrific team move, Johnson’s cutting pass allowing Maguire to take the ‘keeper out of the equation and Barkuizen tapped into an empty net.

After six in two games, despite having the best of the chances, North End were held to a draw by Millwall at the Den as Neil Harris’ men dug in to secure a point.

The KCOM was the next destination for the Lilywhites. Barkuizen opened the scoring from a tight angle following a quick free kick before Jarrod Bowen cancelled out his effort.

North End showed their determination to the final whistle and got their rewards for their attacking intent. Daryl Horgan came off the bench to run Michael Dawson on the outside and flash a cross to the back post for Callum Robinson to meet with his head and seal the three points on the road.

September came to a close by welcoming former manager Simon Grayson and his then Sunderland side. In a feisty affair, the unbeaten run was extended to seven games, although North End had to settle for a share of the spoils.

Geroge Honeyman rounded off a Black Cats move to put the visitors ahead before Josh Harrop scored his second of the month from another set piece. His free-kick drew North End level before Hugill put PNE ahead, a superb left-footed volley rifling past Jason Steele. Former North End loanee Aiden McGeady scored Sunderland’s second to steal a valuable point for a struggling Sunderland side.

By the end of September, PNE were in the Play-Off places. Level on points with fourth and fifth, the Lilywhites were occupying the final spot in sixth. The unbeaten month of three wins and three draws saw manager Alex Neil nominated for manager of the month.