Skipper Tom Clarke is delighted to extend his stay at Deepdale after a sucessful five years at the club so far.

The PNE captain signed a new two-year deal, keeping him at the club until at least the summer of 2020, and the 30-year-old can't wait for a full pre-season under manager Alex Neil.

Speaking of his new contract, Clarke said: "I'm over the moon to get it done, now I can focus on a good pre-season, a pre-season that I didn't have last season with the manager.

"That's the one thing I'm looking forward to, to having a good pre-season under him and getting ready to kick on and just over the moon that it's done now. 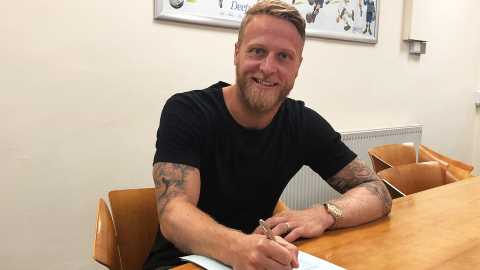 Clarke missed the first four months of the manager's time at the club after suffering a serious injury towards the end of the 2016/17 campaign, but the skipper was grateful for the way the manager kept him involved with the squad and felt that played a big part in speeding up his return to action.

"I have said a number of times since the manager came in, obviously at first I wasn't part of the squad, I was injured, but I never felt distant from the squad, I always felt part of it.

"From the first day he came in he sat me down and told me the part that he wanted me to play and the role I had in the changing room as well, which he didn't have to do. It made the rehab a lot easier knowing that and increased my eagerness to get back as quick as possible to play under this manager and back him with this team.

"I felt that the rehab went perfectly and to get back as quick as I did was because of that."

Clarke joined the club in the summer of 2013, and with progress on and off the pitch each year, the former Huddersfield Town man is looking forward to what is yet to come for the club.

"Since I first joined the club we have improved every season and it's exciting to see what the future holds.

"To keep the lads that we have together and to bring in the additions that we hopefully will do it's an exciting time to be at the club and I'm just looking forward now to getting back in with the lads and get going.

"People have their expectations outside of the club but we have our own as a group and we knew how good of a group we had and how good of a season we could have had.

"We finished seventh but to go in to the final game still with a chance to get in the Play-Offs was tremendous, especially with the injuries we had, to cope as well as we did was testament to the lads and the staff. Hopefully with the additions that we add and the core that we keep together, it's an exciting time."

The defender is the latest player to commit his future to the club, and he feels that keeping the core of the squad together will be key.

"We have a great group, a great mixture of younger and older players and a lot of experience in there and you want to keep that together.

"You need a good dressing room and the manager will bring additions in who are good characters and that's what we will need to push us forward.

"It's going to be another tough season but it's a season that we will be ready for."

Tom sat down with iFollow PNE at the end of the season to reflect on the campaign and look ahead to the future, you can watch the interview now by clicking here.