The Lilywhites beat Burton Albion 2-1 on Sunday afternoon at Deepdale and although they got their own job done, victory elsewhere for Derby County meant Alex Neil’s side narrowly missed out on top six by just two points.

The season-ending victory was a bittersweet one for the midfielder, who was naturally disappointed that other results didn’t favour North End on the day, but he said there is plenty of room for improvement for the team to push on again next season following this encouraging campaign.

“I think the main objective for today was obviously to win the game and then you’ve just got to hope that results go your way,” the 23-year-old told iFollow PNE.

“Sadly, they didn’t and it’s disappointing, but I think as long as the team knows we’ve done everything we can and win the game, [we can have] no excuses. It is disappointing but we’re just glad to end the season on a positive note. 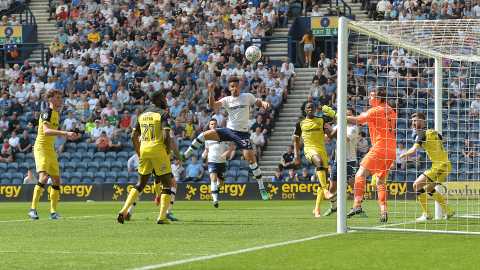 “It’s been an incredible season if you look at the budgets, the sizes and attendances [of the clubs around us]. We’re punching well above our weight and to be competing with the teams around us is credit to all the staff and players.

“The manager coming in has been a real help, he’s taken us on to that new level and you can see in the performances and results we’ve had. There’s massive scope to improve and next year we’ll be looking to go that one step further.

“All season it’s never been through lack of effort. If you look at every game, you can’t pinpoint one where we haven’t tried our hardest and that’s all you can ask from players.

“We’ve lacked quality at times and not finishing chances has cost us, but there’s so much room for improvement with this squad. I think it’s a young team, a new manager has just come in this season and we finished seventh, so next year, our priority has got to be at least getting into the Play-Offs.”

Pearson was awarded the Man of the Match award for his typically all-action display, but with the Brewers still aiming to retain their Championship status, late goals elsewhere meant they needed to win, allowing the game to open up and for Pearson to excel in attack, too.

“I think it’s a bit of a story of our season so far that we go 1-0 up at half-time and it probably should have been two or three. Seani [Maguire] has a great chance, we had one disallowed and then Billy gets sent off, so it’s a massive mountain to climb to hold onto the lead.

“Obviously, Bolton must have scored so Burton had to throw everyone forward, which helped us and we scored on the break. It was a bit of a topsy turvy game altogether, but I think we performed well on the day considering we had ten men as well.

“I heard the crowd cheering, so I wasn’t sure if it was [because of] Derby or it was someone else, so I just tried to do everything to get some goals. Put me in the number ten role and I’ll get double figures in a season anyway!”