The first-year scholar, who partnered Jack Baxter in central midfield against the Latics, felt North End generally performed well in the game but were unfortunate at times.

Simmons admitted there were aspects of the game which North End might have dealt with better but felt the extent of the scoreline was harsh on North End.

“We created a lot of chances to win the game. We all worked hard and started well, but nothing seemed to go our way today.

“It [Wigan’s opening goal] gave them a bit of confidence and Wigan are a good team, so you know that if they score you have a bit of a mountain to climb, but we got back into the game at 1-1. 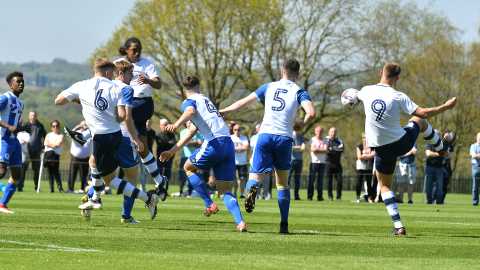 “Their second goal is poor from our point of view, we could’ve prevented it, but it was the third one that was the real turning point. They’ve taken a short free-kick and the referee allowed it [play to continue] and they’ve gone through and scored, which is what killed us late on in the game.

“We were creating chances and putting balls into the box. Fenners [Lewis Fensome] had a chance at the back post and was unlucky not to score and so did Connor [Simpson] and Jez [Jerome Jolly] had a strike at goal.

“They dropped deep in the second-half, which left us the room to play and we got crosses into the box and created some chances, but we couldn’t find that end product.

“I thought we were just unlucky to lose by such a margin because 4-1 doesn’t reflect the performance at all, definitely not.”

Looking ahead, Simmons is hoping to learn from the experience of the cup final defeat and push for further successes in the next campaign.

“It’s always a positive getting to a final and, overall, we’ve had a good season this year.

“I think I’ve come on a lot since Christmas, I’ve continued to work hard and got my chance in the last couple of months. I’ve played quite a lot and got back into the team, which is really good.

“Some results haven’t gone our way during the season but now it’s about hitting the ground the running on the 1st of July for the new season.

“That comes with training and with the attitude of everyone in the team. We’ve just got to stick together and we need to hit the ground running come pre-season and hopefully we can have a good season.

“It’s a new start with new players and hopefully we can start winning some more silverware in cup competitions like this. The U16s coming up are all great players, as well as ourselves as first-years, too. I think we’ve got a real chance of pushing for trophies next year and having a good season.”