The youth team were on the receiving end of a harsh 4-1 scoreline as they lost the Lancashire FA Professional Youth Cup final to Wigan Athletic.

North End were unable to make a breakthrough during their stronger periods and although Lewis Fensome cancelled out Brad Roberts’ opener, Divin Baninigme put Wigan back in front almost immediately to lead at half-time, before Joe Gelhardt and Victor Maffeo scored late on to seal it.

Baninigme could have put his side ahead within three minutes, but dragged wide from close range after James Cottam had parried a cross back into the centre, with Connor Simpson seeing his low effort blocked shortly after at the other end.

Wigan took the lead in the 12th minute, albeit thanks to some good fortune. Mitchell Culshaw chased down the ball to the right byline, delivered back into the box and after a couple of ricochets, the ball fell into Roberts’ path, who rifled into the right corner with the help of a deflection.

Lewis Simons struck wide via a deflection in the next attack but it was a tense affair overall. The nearest either side came to scoring in the intermitting moments saw Charlie Jolley break into the Lilywhites’ box, but Cameron Day defended superbly to regain possession. 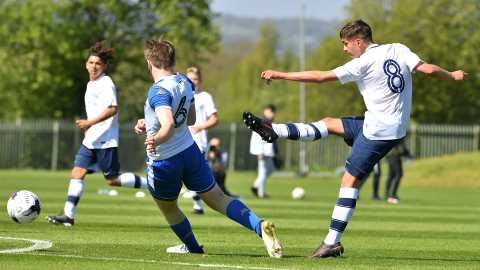 North End’s youngsters grew in confidence and went close when Simpson took on Dolan’s pass and forced ‘keeper Jordan Perrin into a top save to tip wide his low left-footed strike.

The Lilywhites profited from the resulting corner, levelling matters in the 33rd minute. Ethan Walker’s delivery found Simpson, whose volley took a touch off Fensome for a deserved equaliser.

PNE might have scored a second before the break, but two decent openings fell either side of Latics’41st minute effort to send them back in front.

Tyrhys Dolan glided into the box and was halted as he cut back onto his left foot, with Wigan netting just a minute later. Mwiya Malumo slid a ball into the box for Baninigme, who fired into the bottom left corner from just inside the box.

Jerome Jolly did superbly in the final minute of the half to hold off his man and lay it off for Dolan on the edge of the box, his first-time effort drawing another excellent saw from the feet of Perrin.

Opportunities came for both sides in the moments following the break, as Simpson’s swept effort from the left side of the box was blocked, Jolly drew another long distance save from Perrin, before Cottam produced some goalkeeping heroics at the other end to save Culshaw’s shot with his legs.

For much of the remainder of the second-half, the Lilywhites dominated the play but couldn’t breach Wigan’s resolute backline. Half chances fell for Jolly and Simpson, whose header wide was sandwiched between the former’s two glancing headers over the bar.

Jolly then had another long-range shot pushed wide by Perrin before Wigan took advantage of the Lilywhites’ search for a second equaliser in the closing minutes.

Latics took a quick free-kick in the 83rd minute, with substitutes Maffeo and Gelhardt combining as the latter received a through ball in the box and drilled into the far right corner.

Fensome might have doubled his tally two minutes from time, but he volleyed into the side netting from Jack Baxter’s free-kick.

There was still time for Wigan to extend their lead, Maffeo netting in the 93rd minute. He passed for Malumo and although his shot was blocked, the former finished from the rebound to complete the scoring.

Youth team manager Nick Harrison agreed that the scoreline was harsh on his players, but said they must learn from the experience of defeat.

“The scoreline is really disappointing but at the end of the day, it’s a cup game and it’s all about winning,” he told PNE.com.

“I thought today, again, we performed well, we dominated at times and won a lot of second balls, which we’ve been working hard on with the players. We probably weren’t clinical enough and their goalkeeper pulled off two or three excellent saves.

“But we made it far too easy for them to score their goals, which was the difference between us winning and losing the game today.

“The players can take credit for their work rate, they worked hard and put a shift in and tried to play the right way. But they have to play in the right way and win games because ultimately, that’s what they have to do at the next level.”

Harrison was disappointed with the lead-up to Wigan’s third goal, resulting corner from a quickly taken free-kick, which looked to be taken further forward than position of the alleged foul.

“At 2-1, we looked dominant and I thought we would get the equaliser and maybe if the referee doesn’t make that decision for the third goal, maybe we do get ourselves back [into the game].

“But we’ve got to look at how we got to the point where we were losing 2-1, which is purely down to poor defending and us not being clinical enough.

“We’ve challenged the players at the end of the game – especially the younger ones coming through next year – that they can’t do that, it can’t happen if they want to progress.

“They have to learn from this loss. It’s a great experience for them and they should go away with how horrible the feeling is of watching Wigan jumping up and down celebrating at the presentation at the end.

“That’s something they should never want to experience in football again and hopefully they can take that into next season and beyond.”