Everyone loves a derby game and Preston North End manager Alex Neil is no exception as he prepares his team to face Blackburn Rovers at Deepdale this weekend.

21 November 2018
The North End boss had all his squad back at Springfields after the international break and before taking training he spoke to iFollow PNE and said that he would not be needing to motivate his side for the game.
“It is a great game,” he said. “All derbies are ones that fans, players and coaches look forward to.

“There is always a lot of emotion flying about and it is a crucial three points for both teams, so it should make for a good game.

22 November 2018
“I don’t think the players will need any extra motivation, it is just a case of going out, having the right attitude and playing with a bit of calmness and composure as well as being up for the match.
“That is the balance we have to strike and if we can do that, then hopefully we can impose our style on the game.”
The visitors have had an excellent start on their return to the Championship, only losing three times in their 17 league games played so far and the PNE gaffer has been impressed by the ability to mix their game up.
“They have showed a variety of different strengths over the course of the season so far,” he continued. “I have watched about five or six of their games and some of those games they have played particularly well and deserved to win and other games they have dug in when needed to and made sure they are hard to beat.

“They look as if they have a wide-spectrum of strengths, so that they can mix it up and play when they need to. It is going to be a tough game and everybody knows that, but if we can perform to our best there is no reason why we can’t go on and win it. 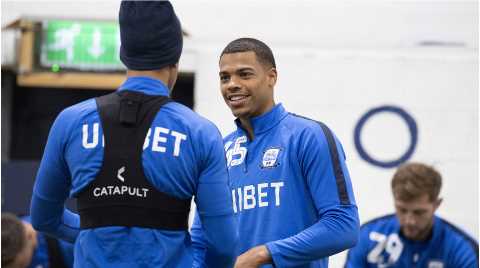 22 November 2018
“What Tony has done well is that he has a really good blend in his squad. He has got experienced players in the spine of the team and he has got good, young players who can go and express themselves around that.
“[Bradley] Dack has come up from the lower leagues and is looking to prove to everyone that he has do it at a higher level and he has more than done that this season. He is going to be a threat, because he has popped up with really crucial goals for them this season, but it will be a tough match.
“Both teams have got good players and it will be who can perform the best on the day.”
But with a big crowd expected and the local bragging rights at stake, Alex feels his side will go into the game in a positive frame of mind.

“The lads enjoy big games. That is what you play football for. Our home form this season has been pretty good and we want to make sure we go into the game in confidence.

20 November 2018
“We should do that; we are unbeaten in seven and we want to make sure we take the performances we were showing before the break and take that into this one,” he added.
For the full interview with the manager, where he also talks about the injuries suffered by Sean Maguire and Daniel Johnson, just click on the video at the top of the page – there is no need to subscribe to watch our free video content.