Lewis Earl felt the youth team would benefit from the confidence boosting nature of their 3-0 win against Morecambe.

Despite a quiet first half, the young Lilywhites were rarely troubled by the Shrimps and profited from a header by Tyrhys Dolan just before half-time, while Brian McManus and Jack Baxter extended the winning margin after the interval.

And having lost last week in the derby against Blackpool, the 17-year-old defender said it was important to get back to winning ways with not only a convincing display, but a clean sheet, too. 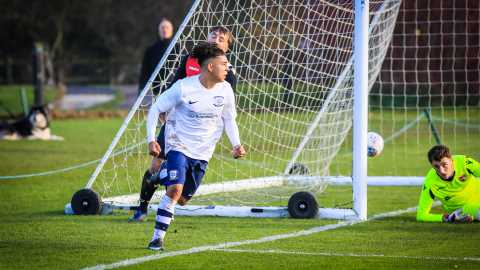 “It was very important [to respond] because we conceded two quick goals last week and then the third was a bit sloppy,” Earl told PNE.Com.

“But we’ve come back from that with a clean sheet and a 3-0 win and it’s always good to bounce back like that.

“We work in training to be clinical because we’ve had a lot of chances recently without taking them, so it’s important for us to be more clinical in games.

“We’ve obviously worked on that [our defending] and the communication is there now which maybe it wasn’t a few weeks ago, so that helps a lot.

“If we lost today, the confidence wouldn’t be as high, but with a good 3-0 win we can go on with confidence.”

After being restricted to fewer appearances in the earlier parts of the campaign, Earl is now in a positive frame of mind, having started the last five matches since an injury to a team-mate forced him off the bench against Fleetwood Town in mid-October.

And that confidence is perhaps all the more important now, both individually for Earl and collectively, with the youth team now not in action until they face Charlton Athletic at Deepdale in the FA Youth Cup third round.

“It’s just been a case of getting myself into full-time football and now I think I’ve got myself there and I’m doing well, so it’s just about keeping the shirt,” Earl continued, speaking of his recent run in the side.

“This win is good in terms of building confidence ahead of the FA Youth Cup and it’s always good to build confidence before big games – you want to stay on a winning track.

“We will keep getting our fitness up because it could go longer than 90 minutes and keep working and doing what we’re doing. We haven’t got any games now until the FA Youth Cup, so we’re all focused on that.

“I think we can go in there with confidence after this game and believe we can win and hopefully progress through the rounds.”