Paul Gallagher described the closing stages of Preston North End’s draw against Ipswich Town as 'crazy' as the midfielder made vital contributions at both ends of the pitch.

The 34-year-old was brought off the bench with 19 minutes of normal time remaining as the Lilywhites trailed to Freddie Sears first half spot kick, North End’s No.12 curling a free-kick into the bottom corner with his first touch of the ball. 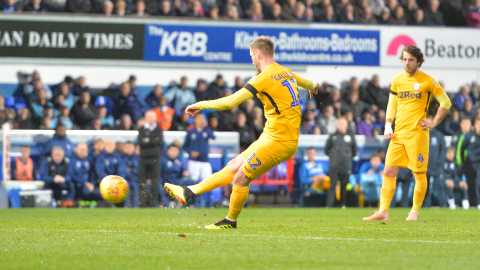 But the midfielder took over the gloves from Chris Maxwell, following the goalkeeper’s dismissal moments after his equaliser, Gallagher praising those in front of him as they restricted to him making just one stop – an outstanding one to deny Sears on the volley.

“The manager just said to try and get on and get my foot on the ball and luckily enough my first touch I managed to score,” Gally told iFollow PNE post match. “My second touch was a goal kick, which was crazy!

“We just had to do whatever we can when things like that happen. We had made all the substitutes and I was confident, I said to the manager that I would go in goal because I used to go in goal as a kid.

“I think he [Alex Neil] wanted [Louis] Moulty to go in net because we didn’t have a central midfielder, so he wanted me to stay in midfield with Ben Pearson, but I took responsibility and said I’d go in goal not a problem.

“Moulty came into midfield and did a great job for us. I think we probably should’ve won the game at the end, we had a number of chances, there was Lukas’ chance and Tom Clarke had a few scrambles at the back post. To be fair, the boys in front of me defended the box for their life and they made it easy for me.

“I kind of knew that any opportunity they got, they were probably going to shoot, thinking a midfielder is in goal. To be fair, I saw it [Sears’ volley] and kept it alive, I didn’t push it over for a corner because I thought they were a threat from corners.

“I didn’t think of anything else, just to keep the ball out of the net, that was basically the one thing I had to do and I was happy to do that. But the boys in front of me, from the front to the back, were magnificent.”

The midfielder was pleased to help the team with the all-important equaliser and he dedicated that impressive effort to Vichai Srivaddhanaprabha, the chairman of his former club, Leicester City, who tragically passed away last week.

“I told Hunts [Paul Huntington] to push into the wall,” Gally continued, speaking of his free-kick goal. “That’s twice now I’ve come in and scored a free-kick with my first touch so that was nice. That got us right back into the game and to be fair we went on strong from there, even with ten men we looked comfortable.

“The goal I scored, I dedicate that to the Leicester chairman who passed away so that was a good one for me to score. It was just fitting that I scored today, I was sat on the bench and I thought if I got on that I would score, it was just written in the stars.

“First and foremost I’m obviously delighted for my team to get a goal and get something out of the game and with Vichai passing, that one’s for him.

“Winning games and going on unbeaten runs keeps the confidence up. We knew it was going to be a tough game with the new manager coming in and the effect that has on players, this will be a difficult place to come now under Paul Lambert. But we go away with a point and the unbeaten run continues.”