We turn the clock back to our last Championship Play-Off campaign, back in 2009, for our latest look back to a memorable match and boy was this an eventful afternoon at St Andrews!

29 November 2018
It was a game with a party atmosphere at the outset, with the hosts, managed then by current Scotland boss Alex McLeish, able to clinch promotion to the Premier League if they overcame the Lilywhites.
But the game was to have everything, with stunning goals, red cards and a last-minute sting in the tale.
Alan Irvine’s North End knew that only a win would give them a chance to go into the last day of the season with an opportunity to make the top six and then they still required Cardiff City to lose both their games.
But with seconds to go it looked like that dream was out of the window, that was until Ross Wallace showed all his quality.

It looked initially like the celebrations were going to be all blue, when just before the hour mark Kevin Fahey headed home for the second city side and the promotion chants were echoing around the stadium. 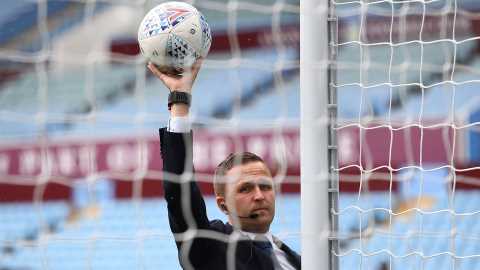 29 November 2018
However, on 60 minutes referee Phil Dowd sent off North End’s Lee Williamson and the home side’s experienced midfielder Lee Bowyer for grappling inside the centre circle and from that point it was the yellows who took the game by the scruff of the neck.
Nine minutes later the game was all-square, with North End skipper Paul McKenna firing in a superb leveller into the top corer from almost 30 yards and in the final minute the team were awarded a free kick, just left of centre, 30 yards from goal.
Wallace stepped up and curled a ball with pace and power into the top corner, unstoppable for Maik Taylor in the Blues goal, and the Scotsman ran to celebrate in front of the elated travelling army of North End fans.
Wallace saw red in the aftermath of the drama for his celebration, ruling him and Williamson out of the dramatic final day against Queens Park Rangers at Deepdale, but he had done his part that meant the side progressed to the Play-Off semi-finals.
Speaking after the game, McLeish said: “We know that we blew this opportunity and we have one left to get up to the Premier League automatically.
“They were two brilliant goals and sometimes you can start splitting hairs to analyse why you lost. We had our opportunities, we had some of the game at 1-1, but it didn't go for us.
“We have to go and win at Reading and I'll make sure that every player is aware of my feelings on that and the positive side of things in the coming week.”
Meanwhile PNE boss Irvine added: “Even though this is as hard a place to come back as you can possibly find in the Championship, I still felt there were chances for us.

“If these results manage to get us in the Play-Offs then fantastic, it will be a great season for us considering where we were this time last year.