Back in December 2016 Callum Robinson won the 100th derby between Preston North End and Blackburn Rovers with a late goal in a pulsating clash at Deepdale.

21 November 2018
The forward slotted home after Greg Cunningham’s superb run and pass with ten minutes to go, to give Simon Grayson’s men a 3-2 victory over their local rivals in front of the Sky TV cameras.
Daniel Johnson has given the Lilywhites an 18th minute lead with a trademark curling effort from 25 yards, before the No.11 gave away a penalty at the other end.
Chris Maxwell made a fine double save from Danny Graham, who took the spot kick, but the Rovers striker drilled home at the third attempt to level, only for Johnson to give PNE a half-time lead with the home side’s first penalty since April’s clash at Ewood Park – referee Kevin Friend with an excellent spot to penalise Darragh Lenihan for handball.
Graham again levelled with 20 minutes left, his shot taking a deflection off skipper Tom Clarke to give Maxwell no chance, but Robinson gave the vocal Deepdale faithful the bragging rights with his winner.
Without Aiden McGeady, Paul Gallagher and the suspended Eoin Doyle and Jermaine Beckford, Simon Makienok was given a chance in attack, partnering Jordan Hugill up front, with Marnick Vermijl and Robinson operating down the flanks, as the North End boss made two changes to the side that lost at Sheffield Wednesday the previous Saturday.
And his team started at a high tempo, dominating the first half. Ben Pearson saw a rocket from 15 yards heading towards goal until Charlie Mulgrew got in the way on ten minutes, but there was no stopping the opener.

The ball was worked down the left wing and Robinson drove a ball in from the touchline, taking a deflection off Ben Marshall. The ball fell to the feet of Vermijl, with his back to goal, who cushioned a lay off into the path of Johnson, who curled the ball from outside of the post, back in to the Bill Shankly Kop goal, giving Jason Steele no chance. 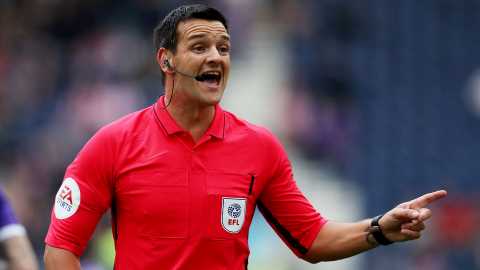 22 November 2018
However, the former Villa man was in the thick of the action at the other end just three minutes later, as his tackle on Rovers loanee Sam Gallagher gave the match official no hesitation in pointing to the penalty spot.
Former Swansea and Sunderland striker Graham stepped up, but Maxwell guessed the right way, making a brilliant stop and then somehow changed direction to deny the No.12 a second time. Alex Baptiste then got his body in the way as Gallagher tried to scramble the loose ball home, but it dropped kindly back to Graham who drilled a left foot shot through the crowd into the inside right-hand side-netting to give parity to the visitors.
The Lilywhites had not had a penalty since Shane Duffy’s handling on the line at Ewood back in April, but it took an excellent spot from Mr Friend to finally see them awarded one.
After a period of pressure by North End, the ball was recycled out to the right-hand side, before a cross was played in towards the ever-dangerous Makienok. Darragh Lenihan went up with the big Dane and stuck up a right hand to deflect the ball. The PNE No.9 still got a header in, which brought an outstanding stop from Steele, but the referee had seen the hand and immediately pointed to the spot, booking the Rovers defender.

Johnson stepped up and calmly sent the east Lancashire side’s custodian the wrong way, caressing the ball into the bottom left hand corner to put his side ahead once again.

20 November 2018
Despite having 65 per cent possession and the majority of the chances in the opening half, the Lilywhites could still have come in level after the break, grateful to Maxwell for a fine save to deny Graham a second, after his looping header following a bouncing ball in the box, was tipped just wide by the Welsh stopper.
The second half saw Owen Coyle’s side step up the pressure. The Scot was apoplectic on the touchline when he felt Corry Evans had been fouled in the box by Ben Pearson, but the TV replays showed the midfielder was already on his way to the floor before any contact from the PNE No.4, the man in black again making an excellent decision.
But Graham was again the thorn in the North End side with 20 minutes to go. Substitute Marvin Emnes slid a ball down the left-hand side of the box and the striker hit a left foot drive that took a deflection off Clarke and past Maxwell into the bottom left hand corner.
The equaliser proved just the fillip that the home side required though and they grabbed the winner in the 80th minute. It was a great move as a long ball found its way to Ben Pringle, on for Hugill, who put the ball inside the right back for an overlapping run by Cunningham.

The Irishman drove at the Rovers defence before a clever check inside and then picked out Robinson ten yards out, who took one touch to control the ball, opened his body and fired right-footed into the bottom left-hand corner in front of a buoyant Town End. 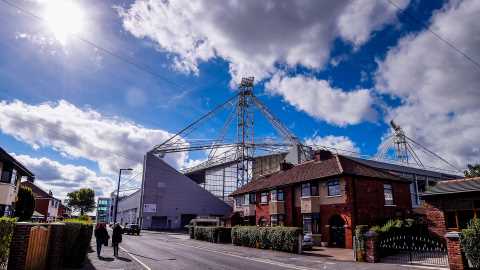