New Ipswich Town manager Paul Lambert is putting a high level of importance on Saturday’s visit of the Lilywhites to Portman Road – his first game in charge of the Blues.

1 November 2018
The former Norwich City boss has taken charge of the Canaries’ fierce rivals and for the third time in his managerial career will see North End as the opponents for his first game in charge.
Speaking at his unveiling press conference in the week, he was keen to stress that Saturday’s encounter was a big game.
“The next two games are huge,” he told the gathered media. “Listen, every game is huge in the league whether you are trying to get out the league or stay in it.
“This is a big football club with a really big fanbase behind it. If they cannot judge us on what’s happened before and come and get right behind us then there will be a brilliant atmosphere. I’m pretty sure they will and I don’t have any fear or trepidation that they won’t come out and support the team.

1 November 2018
Lambert, who left Stoke City at the end of last season, is feeling refreshed and is looking forward rather than back at his new club’s difficult start to the season.
“I’ve had six months off and you start to get itchy feet, as they say,” he continued. “I can’t wait to get going really and I’m really looking forward to it. I can’t promise anything, but I’m really looking forward to getting going.
“You can’t change the past and what’s happened in the first few games. But we will identify things pretty quickly and try to sort them. That will come from the collective. We need everybody.
“We need the team to enjoy playing football again, which I think is important, and we need the team to play with enthusiasm as well. I’ll give it 100 per cent. Everything I’ve got I’ll give with my experience and my heart. Everything I’ve got to try and help this football club.

“I only came in on Sunday with the lads, but the group that trained were excellent. Really, really good. I spoke to the staff and everybody here and they’re all really upbeat. If you came through the door you wouldn’t think the club is in the position that it’s in, but it’s the reality of it.

“My job is to try and change the whole feeling of that. The whole mood swing of it. You don’t get jobs when things are going great so you know there’s something up. It’s my job to try and rectify it.” 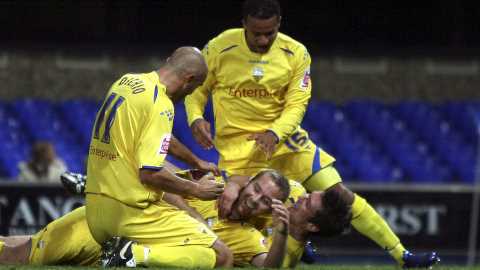 1 November 2018
So does he expect a ‘bounce’ from his arrival? “People can say ‘oh, we’ve got a new manager and we’ll get one or two wins and it will go back to normal’. That’s normal for people to think that way.
“My job is to try and keep it consistent and try to get the players and supporters to interact with each other. That’s what we’ll try and do. We’ll try and get everybody. We need everybody.
“We need the staff, we need the players and we need the fans to be united. As long as they see a team really fighting and playing in a different way then they will get right behind us.
“There’s no secret in the game of football, you just try and win games and that keeps everybody pretty happy. I think what we have to do here is create an atmosphere where we have a lot of fun as well.
“We’re going to try everything we can to win games. If we do that we have a great chance. It’s a better place to come and work when it’s more upbeat and we’ll try and generate that. If we can, then we have half a chance.
“There have maybe been a few games where the lads just haven’t got going and suffered defeats. That’s normal when you’re not winning and that can happen. But forget what’s happened in the past, we have to look to the future now. I’m pretty sure there will be a different team on Saturday – whether we will win, nobody knows, but I’m sure you will see a different team.”