Josh Pollard says the youth team will be working hard to put their derby day defeat to Blackpool behind them with further important matches awaiting them in the coming weeks. 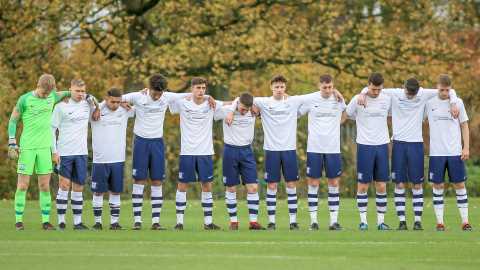 North End were on the wrong side of a five-goal thriller at Myerscough College, conceding a last minute goal for Blackpool to win it 3-2, after Ethan Walker scored and Jerome Jolly’s corner was parried in to give the visitors an early advantage.

As a locally-born player who has been within the club’s Academy system for almost a decade, Pollard is well aware of the nature of games against Blackpool and admitted that the team perhaps became complacent after their terrific start.

“We had a really good start with two goals early on,” the Poulton-le-Flyde-born midfielder told PNE.Com. “In the first 15 minutes, I thought we were excellent – we got on the front foot, won second balls and got plenty of shots off.

“Ethan Walker scored a great goal for us and it’s a mistake from their ‘keeper which then puts us 2-0 up. I thought we eased off it a bit after that and they got themselves back into it to make it 2-2 at half-time.

“The two goals meant there was a bit of comfort zone for us and we eased off it too much, whereas we should have kept trying to get more and more goals, because being on the front foot was working for us.

“Blackpool had a good 15 to 20-minute spell towards the end of the first half to get themselves back in it and it was all to play for then after half-time.”

The 18-year-old felt North End were a little unfortunate in the closing 45 minutes, with regards to having some good chances that couldn’t be converted into a third goal, as well as the nature of Blackpool’s last-gasp winner.

But Pollard said that wouldn’t be an excuse for the team as they look to put things right in their forthcoming matches, as they host Morecambe next weekend while cup matches in both the FA Youth Cup and Youth Alliance Cup are also likely to take place before the Christmas break.

“It was just unfortunate conceding in the dying minutes. It’s just all down to organising and doing things properly towards the end. It’s a mistake [which leads to] the free-kick and it’s a poor clearance and it’s ended up in our own goal, which was unfortunate.

“We had a few chances in the second half, there was one similar to the one where I slid Jez [Jerome Jolly in last week [against Tranmere], but it got cleared off the line so that’s unfortunate as well.

“We had a really good week of training and the intensity was really high going into the game, we just need to control the game better. We just needed to give it that bit extra in the second half to try and get the winner but obviously it didn’t go our way.

“It’s a big rivalry for me and it’s very disappointing to lose it, it’s a game I really wanted to win. But we have Morecambe next week and the FA Youth Cup coming up as well, so we need to get back to winning ways going into the FA Youth Cup so we have that winning mentality to do well in the cup and hopefully progress further and further.”

North End will face either Charlton Athletic or Southend United in the FA Youth Cup, while also playing host to Bury in the northern quarter-final of the Youth Alliance Cup, with dates and further details still to be confirmed for both ties.