Louis Moult felt the intensity shown by Preston North End was one of the key factors behind their 4-1 win over Blackburn Rovers. 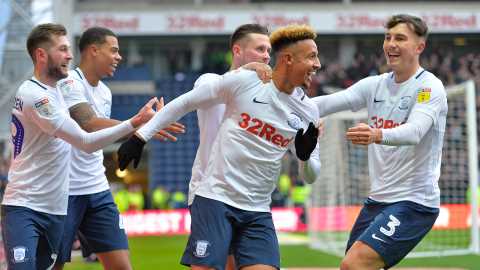 The Lilywhites secured the Lancashire Derby bragging rights in emphatic style, early goals from Tom Barkhuizen and Callum Robinson setting the tone before Moult himself and Alan Browne found the net late on, after Danny Graham had pulled one back for the visitors just after half-time.

Watching on from the dugout in the opening 45 minutes before making his impact after the interval, North End’s No.9 felt the team’s all-action style played a huge part in the win.

“The atmosphere here today was rocking,” Moult told iFollow PNE post-match. “We started so brightly and when you go two up like that, the other team’s always going to have a passage of play and I thought we did well to see it out until half-time.

“The thing I noticed was the tempo in the game, the tempo from us – it was so fast and I think that’s what shocked them.

“They were on the back foot straightaway and we were on the front foot and they just couldn’t deal with it. They started to come back into the game but I thought we saw the game out brilliantly in the last half an hour.

“If you look at all the goals today, they’ve all come at a great time. We had two early on and then saw it out until half-time, they’ve then scored straightaway but we got the next one and I think that was most important to nullify the game and their spirits before we killed it off with the fourth.”

The striker came off the bench on the hour mark, replacing Lukas Nmecha and getting on the scoresheet within 15 minutes of his arrival.

And Moult was impressed by PNE’s response to Blackburn scoring so early in the second half and their subsequent control of the game’s latter stages.

“When you come on like that, you just want a chance and thankfully I got my chance and put it away. After that, I thought we managed the game brilliantly. Our build up play and game management all came into one.

“I was watching the game first half and trying to see – if I was going to come on – where I could improve us. I felt winning the first one [second ball] would be massive and I think managed to do that on a few occasions. From then on, I thought I managed to hold the ball up well.”

Alex Neil’s side are now unbeaten in their last eight outings and the 26-year-old said the fans’ backing has helped the players in their impressive run of form.

“I think that’s eight unbeaten now, the fans backed us today and we as players, and everyone around the place, appreciate that.

“It’s probably the busiest I’ve seen Deepdale and the loudest, that’s for sure, and we thrived on it today as you see from the two early goals and the 4-1 performance.

“We always believed and I think that’s important, we always believed in ourselves and you have to believe as a football club, and we did that. They [the fans] stuck with us and we all stuck together and I like to think we’re coming out and looking at the table now in a positive manner.”