Alan Browne believes Preston North End are beginning to benefit from some better fortune as Alex Neil’s side made it four games unbeaten with the 4-3 victory against Brentford.

The Republic of Ireland international helped the Lilywhites get off to a flyer by opening the scoring inside five minutes, with Callum Robinson notching a brace while Tom Barkhuizen was also on the scoresheet on the night.

North End had to fight off some late pressure from the visitors, who scored twice after the break after the Lilywhites had led 3-1 at the halfway stage, but PNE’s No.8 felt the side were due the luck which helped them to see out the game for the three points. 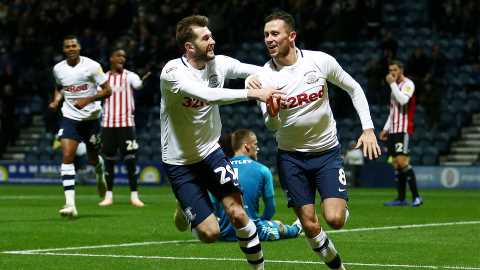 “For everyone coming out tonight, it was an exciting game, probably for both sets of fans,” the midfielder told iFollow PNE post-match. “It was a little bit nervy at times but we dug in in the end, that’s what we needed and thankfully we saw it out and got the win.

“We’ve conceded a few late ones this season and we just know that we needed that bit of luck. Sometimes it’s not always down to quality, we just weren’t getting that little bit of luck that we needed at the start of the season.

“In these last few games, it’s been good to us, especially last week against Hull, you could see that our luck was finally changing and again here tonight. So that’s something we can add to and kick on from here.

“Ever since the international break, we’ve been really good. The Wigan game gave us the start that we needed, it’s four games unbeaten now and long may it continue.”

The 23-year-old had some involvement in all three of the hosts’ first half strikes, burying the first himself, passing to Darnell Fisher to set up Callum Robinson and then standing over the indirect free-kick which eventually led to Tom Barkhuizen’s third.

“To be fair, I didn’t know much about the first touch, I just tried to let it hit me,” Browne said of his opening goal. “Fortunately, it fell into my path and I got a bit of luck with it going under the ‘keeper.

“But that’s what we’ve been missing all season – just that little bit of luck – and thankfully I’ve took it well and credit to the boys for taking their opportunities afterwards.

“That [North End’s second] goal was all about Callum’s [Robinson] touch. Darnell [Fisher] put a great ball into him and not many players would’ve dealt with that, but we know the quality that Cal possesses and thankfully for us, he took a great touch, put it into the bottom corner and put us in a good position.

“I said to DJ [Daniel Johnson] to roll it to him [Lukas Nmecha] because he’s been working hard for us and he hasn’t got that goal yet, I personally wanted him to get on the scoresheet and he was in a good position but nobody picked him up.

“Lukas hasn’t had that bit of luck that he needs so far but everything else that he’s doing is fantastic, his work rate is brilliant and likewise with the boys coming on in his place. I thought Louis was excellent again when he came on and nearly set one up towards the end.

“It’s been a real shift tonight and we got what we deserved.”

Watch Alan’s full post-match interview with iFollow PNE in the video above.