He was the penalty shootout hero of the youth team’s Lancashire FA Youth Cup victory over Burnley on Tuesday afternoon, but youth team goalkeeper Jimmy Corcoran says making saves is simply part of his job.

With North End and the Clarets having drawn a blank in 90 minutes and then both scored their first six penalties in the subsequent shootout, there was nothing to separate the sides until the Republic of Ireland youth international saved Burnley’s seventh effort with his feet. 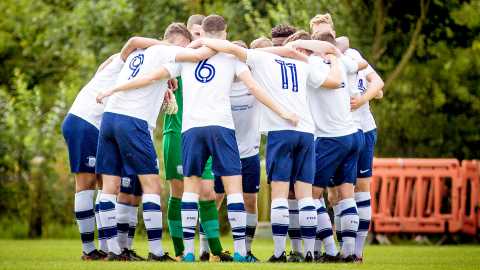 The 17-year-old admitted it was pleasing to make the all-important stop, with teammate Louis Potts going onto convert the winning effort for PNE, but stressed the importance of maintaining his concentration in order to do his bit for the team.

“I didn’t commit fully to my right-hand side but I managed to get my foot at it,” Corcoran told PNE.Com of his shootout-clinching save. “It was a great feeling to help the team out by saving it.

“The other lads’ job is to score the penalties and goals in the game and it’s just my job to keep the ball out of the net and that’s ultimately what I did.

“We knew there was no extra time and that it would go straight to penalties if it’s level at full time. But we back ourselves in a penalty shootout, we practised the day before the game and I think most lads scored all of them [in training].

“It was in the back of my mind throughout the game, but I like to think of the moment I’m in and not further on because you can start to lose concentration during the game if you start thinking of what’s ahead instead of what you’re doing at that moment.”

“Burnley came out all guns blazing, they had a ten-minute spell and then I think we got into the game. I think I only had to make one or two saves in the game which is a quiet day but it’s my job to make those saves, it’s what you have to do.”

This was also Corcoran’s first involvement in a penalty shootout scenario since finding himself at the centre of a controversial incident in the U17 European Championships earlier this year.

After his Republic of Ireland side drew with Holland, Corcoran was cautioned for alleged encroachment after saving one of the opposition’s spot kicks and having already been booked, the goalkeeper was harshly sent off for the incident.

But North End’s first year scholar said that that incident hadn’t crossed his mind as penalties approached against the Clarets.

“What happened last time, it was what it was,” Jimmy continued. “I’d like to think I played reasonably well in that game and in that penalty shootout, it was just unfortunate really.

“But that wasn’t on my mind at all during this shootout, I just had a clear mind and I thought that I was going to save every ball that came my way. I did that and what happened in the European Championships against Holland didn’t even cross my mind.”

Corcoran was returning to the side for his seventh outing of the campaign, recording his second clean sheet, having shared the gloves with James Cottam thus far this term.

“James and Callum [Lenton] are excellent goalkeepers and there’s that competition in training every day. I don’t mind not playing the odd game, everybody has to play games every now and then.

“Nick [Harrison] has to manage three ‘keepers, so it’s his job to pick games for us to play and you take each games as it comes.

“A clean sheet is always a positive, I’d like to think we can get many more of those this season and get back on a winning run again.”