As we mark 100 years since the end of the First World War, The Royal British Legion is asking the nation to say ‘thank you’ to the entire generation who served, sacrificed and changed our world. 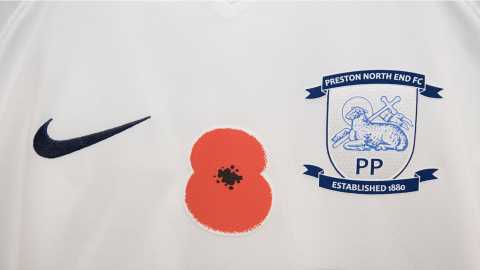 25 October 2018
As the 2018 Poppy Appeal is launched red threads have been woven into the fabric of the nation; through cities, communities and places that wouldn’t be what they are without the outstanding contribution of the First World War generation.
This story is powerful here at Deepdale, where the Christmas Day football match was played by Dick, Kerr Ladies Football Team in 1917.
Dick, Kerr Ladies formed at Dick, Kerr & Co Ltd Munitions Factory in Preston during the First World War along with many other women’s sports teams, born out of the mobilisation of men’s teams to the front.
But the Dick, Kerr Ladies FC were not just about the beautiful game. Their matches drew such a crowd that they used it to raise funds for wounded soldiers who were being treated at the town's military hospital; many whom were fathers, brothers, husbands and sons of the players.

This was just one of the many ways that women during the First World War forged new roles and changed society – the most significant result of which was winning the right to vote in 1918.
The thread at the Deepdale ground links the football club to other sites across the country, and provides one example of the enormous contribution that the First World War generation made 100 years ago, and reminds us why we should say ‘thank you’.

If you want to say ‘thank you’ to the First World War generation or the generations that have served and sacrificed in more recent years, please visit https://www.britishlegion.org.uk/ or join them on social media at: