Adam O’Reilly struck late in the first half as North End’s youngsters drew 1-1 against Fleetwood Town at Poolfoot Farm, maintaining their unbeaten away record this season.

Carl Johnston had put the Cod Army in front before O’Reilly equalised six minutes before the break and despite a rallying second half display, the young Lilywhites had to settle for a point.

The hosts began at lightning pace in a scrappy contest, the first chance falling their way eight minutes as Barry Bagley beat the offside trap to go one-on-one against James Cottam, but the Northern Irishman lobbed wide of goal.

Baggley provided quality delivery from set pieces throughout, first displaying that to set up defender James Hill from a corner, who looped his header over the far post.

The Lilywhites looked to be settling with Dolan’s effort bouncing into goalkeeper Scott Pengelly’s grasp and Jerome Jolly’s header forcing the Fleetwood stopper into a smart diving save in quick succession, but they lost Jack Armer to injury midway through the half, Lewis Earl his replacement.

Fleetwood went in front after 26 minutes when Baggley tricked his way to the right byline and pulled it back for Johnston ten yards from goal, whose low first-time finish was beyond Cottam.

Tyler Williams’ header goalwards from Jolly’s deep free-kick was blocked on the half hour, while Baggley’s delivery was volleyed wide by Hill before the hosts’ creative force curled a free-kick of his own over the wall, but Cottam held well. 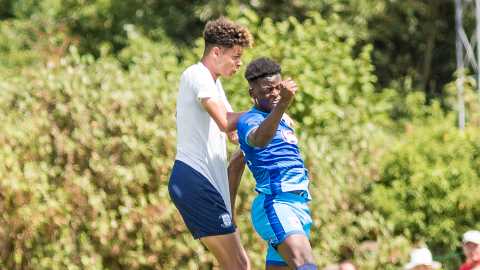 Williams Happy To Return To Action

But O’Reilly went one better in the 39th minute to equalise. Louis Potts’ superb run down the right culminated with a low cross which deflected into the PNE captain’s path as he powered a shot into the roof of the net with a first-time finish.

The Irishman’s effort was enough to take the Lilywhites into the interval level after Sam O’Halloran missed the target with a pair of headers, the away side going on to control the play after the break.

That was evident from as early as the 48th minute, Jack Baxter’s raking pass finding Lincoln McFayden, whose left-wing delivery reached Potts, but he couldn’t wrap his foot around the ball sufficiently to get his effort on target.

Another exquisite disguised pass from Baxter played Potts directly through just before the hour but the frontman didn’t get enough on his dink to trouble Pengelly.

Despite his side dominating the play, Cottam had to keep his concentration at the other end as he brilliantly held onto Shayden Morris low strike after he broke through with a burst of pace.

Baxter then sent a half volley wide from 20 yards before playing Jolly into space down the right channel, his cross picking out O’Reilly to volley, who was only denied by a goal line clearance.

Lewis Simmons defended well to keep out Fleetwood substitute Kian Makepeace, who subsequently headed wide from Dylan Boyle’s cross, after O’Halloran had shot straight at Cottam in a mini resurgence by the hosts.

The Lilywhites had the best chances to win it late on, though, through two fine efforts from Jolly as he curled agonisingly wide of either post, the Lancashire Derby ending as a draw.

After a testing first half, Professional Development Phase coach, Andy Fensome, was pleased to see an improved display from the players in the closing 45 minutes.

“With the two good chances we had in the second half, we should score so if you look at it like that, we should win 2-1,” Fensome told PNE.Com. “At the same time, I wasn’t overconfident that we would hold out, but fair play to the lads for not conceding in the second half.

“We probably panicked on the ball a little bit [in the first half]. Fleetwood put on a good high press and pressed at every opportunity and we didn’t cope with that too well.

“At half-time, we talked to the boys about being confident and taking responsibility which meant if we could take responsibility on the ball and pass properly, we could play through them and I think we did that at times in the second half and played better.

“We had a young, inexperienced back four and to be fair to Lewis Earl, who came on after 20 odd minutes, he played really well. It was only Lincoln [McFayden]’s second or third game and Tyler [Wiliams] is the same.

“They are the lads that are coming up, playing every day and have to keep getting better day in, day out but playing matches provides a bit of pressure and they have to learn to deal with that.”

There will be no respite for the young Lilywhites with a Lancashire FA Youth Cup quarter-final tie awaiting on Tuesday, Burnley the visitors to UCLan Sports Arena in a 1pm kick-off, a which will provide a huge opportunity for the players, according to Fensome.

“It’s a team that we don’t play against very often unless it’s a friendly fixture now,” he continued.

“It’s a massive opportunity in a cup quarter-final, what better game to go and play in? It’s against Burnley, a higher category club, and it’s an opportunity for the players to go and show how good we think they are and a chance to enjoy playing and moving the ball.

“I think as a player, you should go into the game looking forward to it, enjoying the experience and wanting the win to get into the semi-final.”