Lincoln McFayden believes the youth team are well capable of bouncing back immediately after their eight-match unbeaten run was halted by Rochdale.

North End had not lost since the opening day of the season prior to Dale’s visit but a slow start, combined with the early red card shown to Charlie Lyons, handed the visitors the initiative and they went on to win the contest 6-1.

The 17-year-old defender said the group will remain united as they look to concentrate on working on their mistakes against the reigning EFL North West Youth Alliance champions and getting back to their imperious early season form. 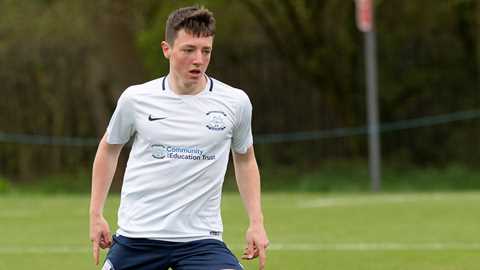 “The first 20 minutes was a slow start from all of us,” admitted the youngster.

“We conceded three which put us in a poor position. The red card made it worse for us unfortunately and from then, we were defending for the whole game which made it difficult.

“The red card was a big turning point in the game because some heads went down at that point.

“We were just told to stay as a team, work our socks off and try to win the second half. Unfortunately, we didn’t do that, but we thought we worked well in the second half and got a goal back, which showed a bit of character.

“We’ve got a strong team and we’re all together. I think we can get our confidence back, we have some good leaders so we can get back up to the level we’ve been playing at.”

After a handful of appearances off the bench, this was McFayden’s first start for the youth team, starting at left back in place of Jack Armer, who was absent due to international commitments, before moving inside after the Lilywhites were reduced to ten men.

“It’s good to get a start, it’s not the best game but hopefully I can carry on from this and continue getting into the starting XI.

“Jack [Armer] is a quality player but it’s a case of keep working and going for each place to try to try to win the place in the team.

“I’m familiar with left back and centre back. We changed formation but we can then learn from that and go into the next week, put this behind us and carry on going by getting back on that good run.

“We could do with a good win there now [in the next game against Fleetwood Town] to bring our confidence back up and go onto Burnley the week after. We need a good performance next week.

“We’ve just got to make sure we’re back at our top level for these games and hopefully we can get the results as well.”