We only go back a couple of years for this latest look back to a memorable match, as North End came from two down in stunning fashion to claim what seemed like an unlikely point at Villa Park.

1 October 2018
It was Jordan Hugill's double who helped the Lilywhites complete a strong second half fightback to claim the draw at Aston Villa.
The hosts were in control at half-time as Albert Adomah first tapped home the opener and then converted a penalty after being harshly adjudged to have been fouled by Aiden McGeady, referee Andy Madley pointing straight to the spot.
But Hugill found the top corner after a mazy run - a stunning strike from 25 yards - and then he headed in McGeady's cross from close range to level.
Both clubs' fans marked the passing of former Villa boss Graham Taylor before the game with a minute's applause.
Villa dominated both possession and territory in the first half, and it was no surprise when Adomah made the breakthrough after ball broke when Gabby Agbonlahor and North End goalkeeper Chris Maxwell raced to meet a Jack Grealish through ball.
Agbonlahor then had a header saved before Adomah claimed his second by sending Maxwell the wrong way from the spot, with North End rightly unhappy with the referee's decision to award a penalty.

North End emerged re-energised for the second half and a point was no more than their second half performance deserved, although Villa also might have snatched victory late on, but for a misplaced Grealish pass. 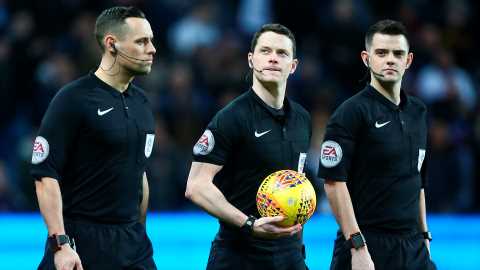 1 October 2018
It meant a happy first visit as a boss for Simon Grayson to the club where he played between 1997 and 1999, while Villa remained the only side unbeaten at home in the Championship at that point in the season.
Aston Villa boss Steve Bruce said afterwards: "We had a really great opportunity to put them to the sword. We were terrific for an hour and every time we went forward I thought we could score.
"To be fair to them they are a resilient mob and they are epitomised by their centre-forward, Hugill, who is not easy on the eye, but is very effective. We gave away two sloppy goals, but the light at the end of the tunnel for me (is) the first half was easily the best we have played."
Whilst PNE manager Simon Grayson added: "The first half was as bad as we have been over the last few weeks. We didn't do the basics. Obviously there was an exchange of words at half-time and then we saw a proper team in the second half.
"I said the third goal of the game would be crucial because Villa Park becomes an anxious place because of the expectancy level at Aston Villa."
Aston Villa line-up: Johnstone, Hutton, Chester, Baker, Amavi (Gardner, 88), Lansbury (Bacuna, 77), , Westwood, Adomah, Grealish (Davis, 90), Green, Agbonlahor. Subs not used: Richards, Elphick, Tshibola, Bunn.
PNE line-up: Maxwell, Vermijl, Clarke, Huntington, Spurr, Gallagher, Browne, Johnson, McGeady, Robinson (Horgan, 60), Hugill (Beckford, 78). Subs not used: Lindegaard, Makienok, Grimshaw, Pringle, Boyle.
Referee: Mr Andy Madley
Attendance: 32,415