Back in 2005, with Wigan heading for the Premier League and North End the Play-Off Final, a huge clash at Deepdale, saw more than 20,000 packed into the ground for the Championship's match of the day.

4 October 2018
The Latics could have all but secured promotion with a win, but they were held to a draw by the Lilywhites, ensuring Paul Jewell's side were still not sure of a coveted automatic promotion spot.
Lee McCulloch had put the visitors ahead just 24 minutes in, nodding home Graham Kavanagh's searching free-kick.
But just before the break Brian O'Neil levelled with a header at the far post.
However, neither side could break the deadlock in the second half, despite McCulloch and North End's Chris Lucketti coming close with headers.
Wigan headed into the lunchtime clash in second place and needing just four points from their final two games to clinch an automatic promotion spot.
Victory at Deepdale followed by anything less than a win for promotion rivals Ipswich Town later on that Saturday would have secured the Latics' place in the top flight this weekend.
But Bill Davies' Play-Off certainties were determined not to make it easy for them, coming close through David Nugent and Richard Cresswell before Wigan's opener.
Against the run of play, McCulloch rose to meet Kavanagh's free-kick from the left and sent the ball past goalkeeper Carlo Nash.

At the other end, Preston's endeavours were finally rewarded in the 41st minute, when O'Neil was left unmarked at the far post to head in Paul McKenna's free-kick. 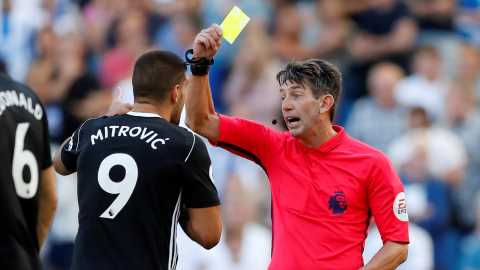 4 October 2018
In a tense and scrappy second half, chances were few for either side.
Wigan's Nathan Ellington saw his shot saved by Nash, while McCulloch squandered an opportunity when his header went wide and Lucketti also headed wide late on as the local rivals had to settle for a point apiece.
After the game, PNE boss Davies said: "I thought we were very, very good today and created some very good chances. We knew it would be difficult and know how good Wigan are - so I can't ask any more from the players.
"We've still got a job to do and look forward to the remaining games - I'm delighted with the effort."
Whilst Latics manager Paul Jewell added: "It's up to us now and that's all I can ask for. We don't have to rely on Ipswich, although it would be nice if Crewe could win.
"Reading will need to win next week so it will be a full-on game. We got ourselves in front against the run of play and conceded a goal from a set-piece, which I was disappointed with. We were nowhere near our best, but we've dug in and nicked a point."
PNE line-up: Nash, Alexander, Lucketti, Mawene, Hill, Sedgwick, O'Neil (Mears, 87), McKenna, Davidson (Etuhu, 63), Nugent (Agyemang, 83), Cresswell. Subs not used: Ward, Davis.
Wigan Athletic line-up: Filan, Eaden, Jackson, Breckin, McMillan, Teale (Jarrett, 63), Kavanagh, Bullard (Mahon, 81), McCulloch, Roberts, Ellington (Graham, 75). Subs not used: Walsh, Wright.
Attendance: 20,221
Referee: Mr Howard Webb (S Yorkshire)