Tom Clarke said it was important that Preston North End kept up their unbeaten run against Rotherham United, despite the disappointment of emerging with one point rather than three.

Tom Barkhuizen’s first half header was cancelled out by visiting forward Michael Smith’s effort after the break and the Lilywhites were unable to restore their advantage as the spoils were shared, making it five matches without defeat for North End.

Returning to the side as skipper in the only change from the side which beat Brentford in midweek, the 30-year-old felt North End’s second half display didn’t match that of the opening 45 minutes, from which they took a deserved lead into the break. 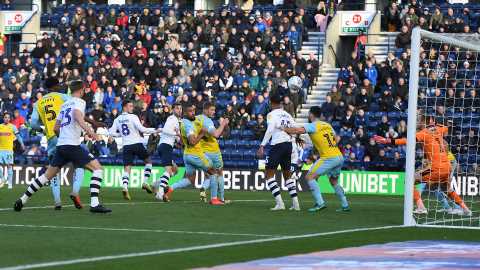 “We knew from the first minute that it was going to be difficult,” the captain told iFollow PNE after the 1-1 draw. “We knew what they were about and they’ve done well with that way they play, they’ve started the season really well.

“We knew it was going to be difficult but we had to match that. I felt we did that and created a lot of chances and obviously got the goal and I thought we’d done really well first half.

“The second half was difficult, we knew they’d come out quickly, they changed their system a little bit and we didn’t start well enough, which is disappointing and conceding the goal was disappointing again. I felt that we still got into good areas and good positions to get that second goal and that was frustrating.

“We didn’t exploit the spaces well enough which again is disappointing because we knew what was going to happen in the second half. They got the goal and both teams went for it and I thought we had the better chances but didn’t get that final result and get the goal.”

Clarke had missed North End’s last two outings following the international break through injury and was pleased to come back into the team to help make it five matches without defeat, the confidence generated from that crucial heading into next week’s clash against Ipswich, according to the skipper.

"I felt good, it’s been disappointing to miss out on the games that I have, I’ve just had a little bit of a niggle on my groin.

“That’s why we’ve created such a good squad and people are going to come in and come out and players are needed for different kinds of games. I’m just glad that I could be out there to try to contribute and we’ve kept the run going which is important to keep that confidence going.

“Yes, we’re disappointed we didn’t get the win, but we’ll go again now, rest up and go to Ipswich which is going to be a similar game, [it will be] difficult and we need to go there with confidence.

“We’re scoring a lot of goals, we’re looking forward and creating a lot, it’s keeping that other side shut and again we’re disappointed we’re conceding today. We need to look at that again on Monday, try to improve and keep working hard.

“It’s nice now the [next couple of] games are Saturday to Saturday, it gives us a chance to work on some stuff on the training pitch and the gaffer can get across what he wants for the Ipswich game.”

Watch Tom's full post-match interview with iFollow PNE by clicking on the video above.