Jerome Jolly explained that the youth team had to approach their final Youth Alliance Cup with a winning mentality, that paying dividends as North End’s youngsters beat Notts County 4-1.

The young Lilywhites, having won their opening two group games and with a superior goal difference on County, who also took maximum points from their opening matches, only needed a point in Nottingham to finish top of the group. 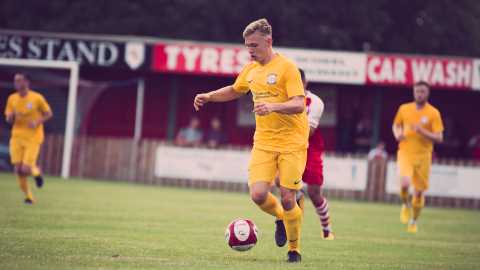 But Jolly said it was important that the side approached the game in the same manner which has now seen them win seven of their last eight matches, failing to lose since the opening weekend of the season.

“It was a tough game, we had to be up early in the morning and come all the way down here,” said the 18-year-old. “The conditions weren’t the best but I think we stood up to that and played well, we put in a good performance and got the win.

“It was a good test today because they had to beat us to finish top of the group, but we stood up to that well. That will help us going into the further cup rounds as well.

“If you go in playing for a draw, you can either get smashed in the first 30 minutes or they could win late in the game. You have to go into the game with the same mentality to win it, which is what we did; we took our chances and punished them in a very good team performance.”

After scoring twice in pre-season, Jolly grabbed his first goal of the competitive season for North End’s third goal against County, having assisted for Charlie Lyons just two minutes earlier, as he spoke of his involvement in both strikes.

“My goal came from good play, Ethan [Walker] showed good vision to play me in behind the back line and I finished it for my first goal of the season.

“Ethan had the ball and came inside and I noticed during the game that all the defenders were drawn to Ethan when he was cutting in, so I thought I’d make a reverse run around the back.

“He had good vision and played a good pass to slip me in and it’s a clinical finish from there. Hopefully I can carry on from there and score some more.

“I’ve also been working on my crosses in training with Nick and Fenners and trying to get my technique better. I put the ball into a dangerous area because I thought if no one touched it, it would have a chance of going in anyway and Charlie got an important head on it to score.”

“I’m pleased with the result, to have scored and I’m happy with the assist as well. We’re on a good run at the moment and we want to keep that going; having everyone involved in the goals and keep the good results coming.”