Tyler Williams was pleased to return to the youth team's starting XI in the all-action contest against Fleetwood Town.

The young Lilywhites came from behind to draw 1-1 at Poolfoot Farm thanks to an Adam O’Reilly strike, having withstood some intense early pressure from their hosts. 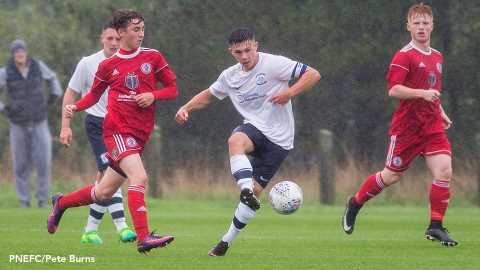 But after some words of encouragement at the break leading to an improved second half display, Williams felt North End’s youngsters were slightly unfortunate not to take all three points.

“I think we were very unlucky to only get a draw out of the game because we did bounce back well in that second half,” said the 17-year-old defender.

“In the last five or ten minutes, we had some great chances. Jez [Jerome Jolly] was unlucky, he’s skimmed one past the post and put another just inches wide.

“It was a good game, a big challenge for us and maybe one of the most difficult games of the season for us so far. They came at us quickly in the first half and I don’t think we expected to be hit that hard from the get go.

“As we gradually got into the game, we started to improve, especially leading into the second half. We did struggle in the first half but it was important to keep it at 1-0 and then get ourselves back in the game.

“We were panicking on the ball a bit so at half-time, we were just told that we needed to relax, move the ball quickly, find an easy pass and we would break down them down and we started to do that when we did come back out for the second half.

“It was a challenge for me, especially coming back into the team, but I was happy to get a full 90 minutes and I enjoyed it. If you get out of the team, you have to take the opportunity with both hands when you get your next chance.”

Williams joined the club’s Academy as an U16 from Burnley earlier this year he is now hoping to have the opportunity to take on his former club in the youth team’s next game – a Lancashire FA Youth Cup quarter-final against the Clarets on Tuesday.

“You just have to have a strong mentality going into a cup game like that,” the defender continued.

“I’m very excited for the game, it will be a test going up against my old team, but I just see that test as a positive, look forward to the game and hopefully I can get some more game time.

“Knowing it’s a derby game gets the boys rallied up because you want to go and win for your team. It puts a good spin on the game because it makes it more exciting and there’s just an overall better vibe towards the game when it’s a derby.”