Jack Baxter’s fifth goal of the season proved only a consolation as North End’s youngsters’ eight-match unbeaten run was halted by a strong Rochdale outfit.

The winners of last season’s EFL North West Youth Alliance league triumphed 6-1 at UCLan Sports Arena thanks to braces from Florian Yonsian and Harrison Hopper as well as additional efforts from James Nield and Fabio Tavares, aided by the early dismissal of Charlie Lyons.

Adam O’Reilly returned from injury and Lincoln McFayden made his first start of the season in two changes from the side which Notts County last time out, the latter replacing Jack Armer, who had spent the week away on international duty with Scotland U18.

Rochdale were in the ascendancy after just five minutes as Yonsian curled from left to right and into the top corner from 20 yards out.

Yonsian scored his second a minute later when Jimmy Corcoran palmed away Tavares’ low strike, but the forward was on hand to convert the rebound.

Nield popped up with another in the 20th minute by volleying in Lewis Bradley’s corner, and North End were dealt another blow three minutes later as Lyons was sent off for a high foot on Yonsian.

The red card brought about a reshuffle with Brian McManus coming off the bench to take up a left-sided midfield role, while Lincoln McFayden moved to centre back and Jerome Jolly to left back, following Baxter’s brief cameo there. 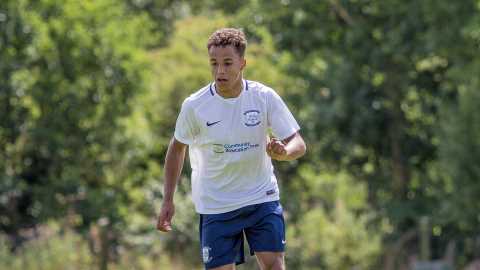 But the visitors remained ruthless in attack with another double salvo late in the half, Tavares and Yonsian reversing roles in the 36th minute, the former latching onto the rebound from the latter’s initial shot, which had been well stopped by Corcoran.

Hopper was next on the scoresheet three minutes later, finishing off a well-worked move by heading in Joe Dunne’s cross, and Dale would have had another immediately after, but the offside flag ruled Tavares’ effort redundant.

There was some respite from the Lilywhites before the break with O’Reilly unable to get a shot away from McManus’ delivery, although he did manage to tee up Tyrhys Dolan, whose swept effort narrowly cleared the crossbar from range.

PNE came out much stronger after the interval although Corcoran was forced into some impressive stops early on, denying Luke Mathieson and Bradley in quick succession.

Dale’s threat shifted to a counter attacking one as the Lilywhites saw more of the ball and there was some reward for that. Indeed, Baxter received a return ball from Walker and turned well inside his defender before poking into the near side bottom corner from just inside the area after 64 minutes.

And there was very nearly a second which immediately followed with that as Walker broke down the left side of the box ‘keeper Bradley Wade blocked his placed effort.

After Juwon Hamzat and Hopper had each hit the crossbar for the visitors, Dale did add to their first half goal tally with a late sixth.

It was Hopper who grabbed the final goal after 88 minutes, again converting a left-wing cross, this time sliding in to connect from close range.

Nick Harrison looked to take some positives from his side’s second half display but admitted is plenty of work to be done.

“We probably lost the game in the first 20 minutes going 3-0 down,” he said. “It’s a really uphill task and to then go down to ten men makes it even harder.

“It is a nasty challenge which Charlie needs to learn from but whether it’s a sending off or a booking, only the referee can decide that. The players have to understand how to play with ten men, we’ve come across that against Wrexham; we dealt with it well and went onto win the game.

“It was a really disappointing start, we were poor in possession and didn’t compete enough. After we sorted a few things out at half time, I thought we looked a lot better, even with ten men.

“We challenged the players at half time not to concede another, which we did for most of the second half, and you never know if we could nick one or two back. The chance that Ethan Walker had after we scored might have made the game interesting.

“We’ll use it as a learning curve for the players, going down to ten men and being 3-0 down early on, but the players have to learn from that and we’re going to work on it.”

Harrison is confident the players have shown enough this season to suggest they can bounce back from this setback.

“We created a number of chances and made it more difficult for Rochdale in the second half.

“In certain parts of the game, we defended much better as a team and better than we did with eleven men at the start of the game. We will work through things with them and if they come across this situation again, hopefully they can learn from this.

“The good run we’ve been on, we’ve seen some good performances which has meant we’ve picked up good results. We have good players, regardless of what’s happened in this game.

“I’m sure will the players will want to bounce back, we want to see that and they have to do that if they want to be successful and make a career in the game.

“They have to put this game to one side, look forward to the next one and put everything right. I’ve got no doubt they can do that but we need to see that in the next game.”