Alex Neil said he is still looking to find the right balance in his Preston North End side following the 2-2 draw against Bolton Wanderers at Deepdale.

The gaffer felt his side were a threat in a first half in which all four goals were scored but explained that changes were made to solidify the team, which led to a quieter closing 45 minutes for the North End back four. 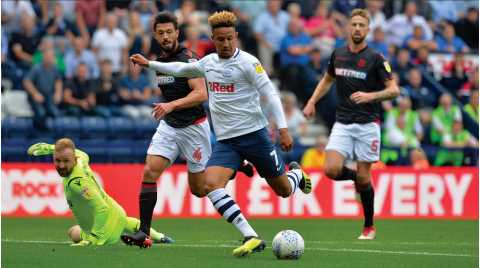 Robinson On Leading The Line

The North End boss wants his team to find that middle ground between looking dangerous going forwards and being resolute in defence.

“For the first 25 to 30 minutes, I was pleased and we were threatening going forward,” Alex told iFollow PNE in his post-match interview.

“In the main, it was going well but after going 2-0 up, we need to be smart and make sure we play the game in a manner which suits us, because we were in charge of the match at that stage. We could’ve gone 3-0 up, we had two opportunities where [Graham] Burkey gets one on his right foot and it goes past the post and Brandon [Barker] has one where he cuts in.

“From that attack, they break down our side of the pitch. It’s a bad error for us in terms of letting them back into the game and they got a real lift from that and that dented us a little bit. From that point onwards until half-time, Bolton looked a more threatening team. 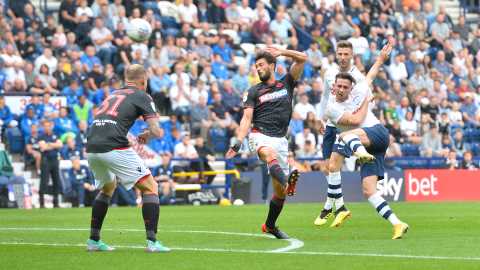 “It’s all good and well threatening and looking as if we’re going to score goals but at that stage, they equalised to go 2-2 and to be honest, I’m thinking I need to get them in at half-time and try to sort it out because I thought the game was going more in their favour than ours.

“We made a couple of changes to try and get us back into the game and to give us a more solid foothold in the game. I think that worked but it prevented us from being really threatening going forwards which is disappointing.

“We went more aggressive with the starting line-up, I played Callum [Robinson] up there just to make sure that he moved the centre backs because they’re big lads and if you just play the right balls up to them, they will find it really difficult. Callum did that well and took his goal well and I think that’s the first two goals from open play this season, so in that sense it worked.

“But when you play that way and you’re that open – and that’s not by design, it’s the way the players play naturally – you leave yourself vulnerable in another side. We’re trying to get the balance at the moment between being threatening going forward and still having that defensive nous to get back and it’s difficult to get that balance.”

The gaffer was pleased by some individual displays at the top end of the pitch, adding that he will be grateful for the upcoming international break as an opportunity to work on aspects of the game on the training pitch.

“I played the guys at the top end of the pitch who are a little bit more likely to score and we’ve had some good performances up there.

“Alan [Browne] has got two goals now, Brandon and Burkey got two and Callum gets his first today. It’s just really frustrating because I thought when we were in charge of the game, at this level we should then make good decisions and should be seeing the game out.

“We’ve spoke regularly, certainly this season, about how goals change games. If we get that third goal, it’s game over and as soon as they get the first goal, they automatically get their tails up and we look a bit deflated from that point. That was the deciding factor of the game, it really changed the match and from our view it was disappointing.

“I think what we need to do is shake off the first five or six games, refocus and get ourselves ready and do what we are good at, which is being really hard to beat, really solid and defensively very good but equally, having a real good attacking threat going the other way. I felt last year we struck that balance really well but this year – and it’s my job – we need to find that balance again.”