Tyrhys Dolan was pleased to mark his return to the youth team matchday squad by scoring in the emphatic 7-0 away win against Huddersfield Town.

The first year scholar scored with a cute chip for North End’s second goal in West Yorkshire and debatably the fifth as well, where his strike took the slightest of touches off Darren Brannigan on its way in. 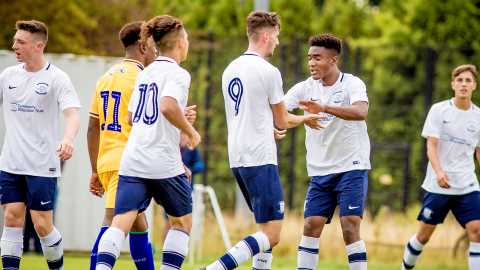 Having missed the last three matches through suspension, it was a positive reintroduction to the fold for the 16-year-old.

“We were always on the front foot and that’s what got it us in most of time – from being positive and stepping in. They were good on the ball and it’s good to do that, but you have to go somewhere with it. They were popping it around but not really hurting us in behind or getting at our back four.

“It [Huddersfield’s style] played into our hands really. When they’re popping it around and we’re being positive, we’re going to nick it off them. It’s hurting them because they’re losing it in an area where we’re almost straight at their goal.

“I noticed from kick-off that the ‘keeper was trying to organise the back four, they were trying to step up. So I knew when I was making that run through the defence for our second goal that he was going to come straight out at me, so as soon as I looked, I dinked it straight over him.

“We said at half-time when we were three up that they were going to come flying at us for the second half. We just managed it again second half, we started flying and got more and more goals and continued hurting them.”

Dolan had not featured for North End’s youngsters since a 4-2 win against Wrexham early last month for an off-the-ball incident.

The absence has allowed the young attacker to reflect but he is confident he has learned from the experience and can be better for that for the remainder of the season.

“It feels good and it’s been a long few weeks out, it’s felt like it’s been forever but it’s good to get back playing. I was ticking over doing running so I didn’t feel slowed down, I felt up to speed and good, so it’s been good getting back to fitness.

“It’s made me learn from my mistakes so I know next time not to do that again and I know next time I get into that sort of situation where I get fired up, that it’s better to walk away and not play into their hands or be aggressive when there’s no need to do that. I’ll take that into the rest of the season and learn from it.

“It’s good to get back and score goals because I think that was the one thing I lacked last season. I’ve been working with John Prince and Matt Craddock on shooting drills after training to practise getting that technique right and running into the box and that’s shown today.”