Alex Neil felt his Preston North End side were on the receiving end of a couple of key refereeing decisions as West Bromwich Albion left Deepdale with a 3-2 win.

The Lilywhites kept it goalless until the break but went behind four minutes into the second half, and although Andrew Hughes and Alan Browne both found the net in the closing 45 minutes, there was no late comeback from the hosts.

The gaffer felt there was an element of fortune about the visitors’ second and third goals and suggested the Baggies could’ve been reduced to ten men midway through the first half.

“I thought there were a couple of key decisions that didn’t go our way,” he told iFollow PNE.

“There was one certainly at the touchline next to me, I didn’t actually see the incident because I’d turned my back, but I could tell by the fans’ reaction that the lad [Kieran Gibbs] had lashed out at Darnell [Fisher]. I’ve seen it back and it’s clear, he goes right across his chest, across his throat. 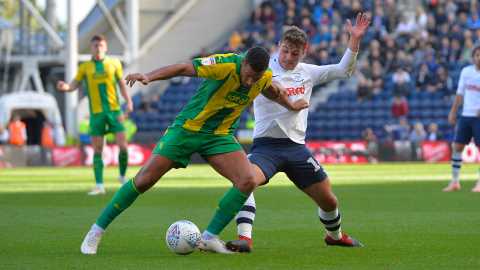 "The free-kick for the third goal was really soft, I don’t think it was a free-kick and there was one with Alan Browne bursting into the penalty area in the second half, the lad is the wrong side and brings him down, but again, we didn’t get the decision.

“That’s obviously disappointing and frustrating because when you’re in the position we’re in, they are key moments and key decisions in the game in one way shape or form. Certainly, the third one is a free-kick that they put in the net – it’s a deciding factor in the game.

“The second goal summed up where we are in terms of our luck. I thought we defended relatively well today, we just switched off for the first goal and Rodriguez gets in front. That was disappointing because we spoke about keeping it tight for the first ten minutes and that’s always the first setback which we need to then respond to, which I thought we did.

“As far as the effort and the endeavour goes, I don’t think the players could’ve worked any harder, they gave us everything they could. The setup behind the ball was good to give us the best chance of getting something out of the game and we need to try and take those performances into the next matches.”

Alex said it’s important that his young side need to learn from going up against an experienced outfit with a trip to Aston Villa next up on Tuesday evening.

“We just need to learn quickly, we’ve got a really young squad, I think the second youngest in the league. We’ve come up against an experienced team today and the majority of their players have spent most of their career in the Premier League, so it was always going to be a tough ask for us.

“I thought we showed enough passion, endeavour and quality at times to suggest that we can hopefully go and win more games.

“It was a good goal [Andrew Hughes’ strike] and then obviously we got the goal late on as well but we then had to finish the match with ten men.

“It’s one of those games where we just need to dust ourselves down and get ready for the next batch of games which is going to be important and make sure we try to get some more points.

“I think it shows where we are with those two lads [Ledson and Jordan Storey], they’re 20 years of age, Jordan’s only just turned 20 a week or two ago. They’re young lads and they need to learn their trade and are doing so in a really difficult league against guys who are really experienced.

“We’ve got to go there [to Aston Villa] and make sure we play as well as we can and we’re more than capable. We did great there last year, we rocked up and they brought on Lewis Grabban, who has moved for £8m twice, and we brought on Connor Simpson.

Watch the full interview with Alex on iFollow PNE now.